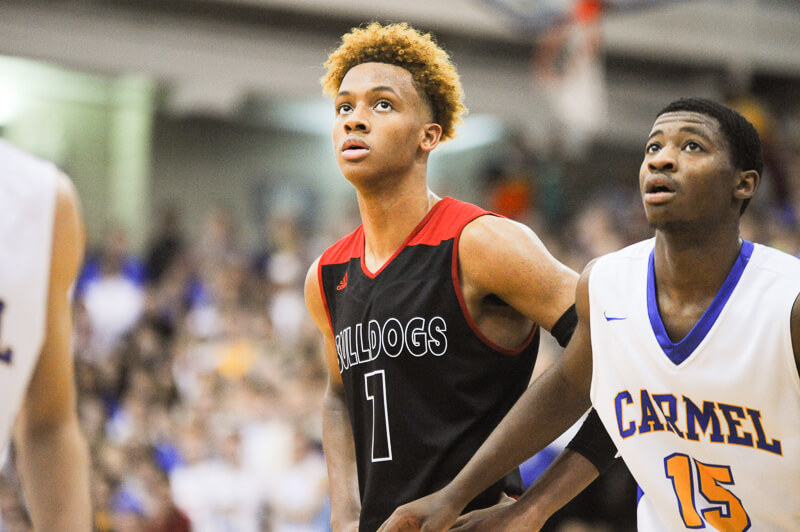 Led by 22 points from Mr. Basketball and Indiana signee Romeo Langford, the Indiana All-Stars led from the onset and cruised to an 109-81 victory over Kentucky.

In addition to posting the game-high in points, Langford had eight rebounds, four assists, three steals, a block and no turnovers.

It was a major turnaround from Friday night when the Kentucky All-Stars, heavy underdogs, won 100-89 at Knights Hall at Bellarmine University in Louisville.

Langford was aggressive from the opening tip and scored nine of Indiana’s first 15 points. After a poor shooting performance on Friday night (6-of-16), Langford was much more efficient on Saturday night. The future IU guard shot 7-of-13 from the floor in 31 minutes.

The Indiana All-Stars shot 46.7 percent from the field and held the Kentucky All-Stars to just 33.3 percent shooting. Turnovers were a major factor in Saturday’s game as Indiana turned 21 Kentucky turnovers into 32 points.

Indiana has now won 18 of its last 20 games against Kentucky in the annual two-game series played each June. Saturday’s announced attendance of 8,266 was the highest for the game in 10 years.

Each of Indiana’s five class of 2018 signees are expected to report to campus on June 12, according to comments made by Archie Miller late last month at Huber’s Winery in Borden.