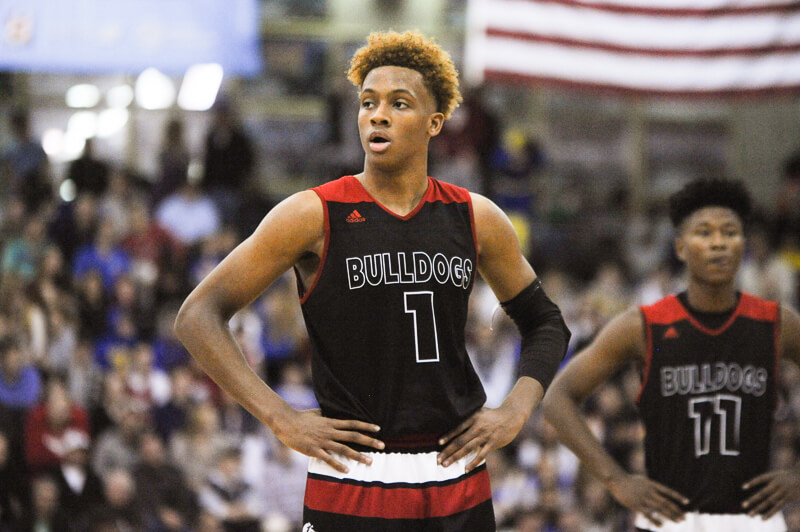 LOUISVILLE, Ky – The Indiana All-Stars were stunned by the Kentucky All-Stars on Friday night, 100-89, at Knights Hall on the campus of Bellarmine University.

“We were just playing catch-up all night it seemed like,” Indiana head coach Jim Shannon said. “Never felt comfortable about how we were playing.”

“We didn’t play hard,” Romeo Langford said after the loss.

“You can’t always control your offense,” Shannon said. “Whether it’s (Romeo Langford) or anybody else, you just can’t always do that. You can control your defense, your effort, getting on the boards, things like that. Those were the things we were trying to talk to our kids about. Let’s do those things. Those are the blue-collar things you can do each and every night.”

Langford led Indiana in scoring, but his 17 points took him 16 shots to reach. He was just 6-of-16 from the floor, including 0-of-6 from three, and missed four free throws.

Damezi Anderson only saw 17 minutes of playing time, finishing the night with four points, one block and four fouls.

Kentucky deployed a zone defense for much of the game, and the Indiana offense struggled to adjust, recording just 12 assists on 34 made shots for the night.

“I didn’t think at times tonight we attacked (the zone) very well,” Shannon said. “Sometimes when somebody throws something at you that you aren’t really expecting, you don’t attack it very well. I didn’t think we did.”

After winning 17 straight games in the series, Friday’s result marks the second consecutive defeat for Indiana. The series shifts to Bankers Life Fieldhouse in Indianapolis on Saturday evening.

“It’s disappointing,” said Rob Phinisee, who posted 11 points and six rebounds. “We just have to come out and play harder tomorrow. We can’t really lose, it’s on our home court.”