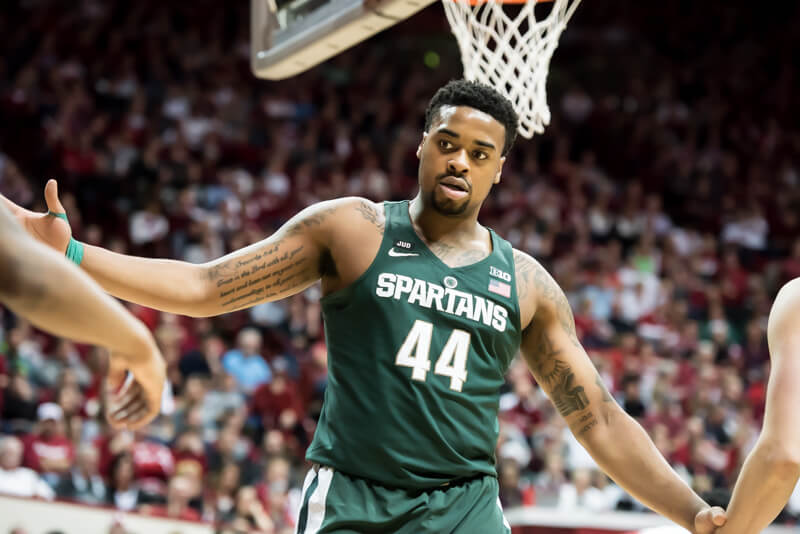 A slew of losses took a flamethrower to the top 16 seeds revealed by the selection committee just over a week ago. That may sound like hyperbole, but consider that of the top eight seed lines in my projections from last week, 23 of the 32 teams lost at least once. In total, that group of teams dropped 31 games.

Meanwhile, nearly every team around the cut line managed to win over the weekend, making the exercise of projecting the field particularly difficult this week. At this point, there is very little separation among teams across multiple seed lines in the middle of the bracket as well as among the final eight teams I reviewed for the last three at-large spots in the field.

That should make for an interesting last few weeks of the season, and some long nights for those of us trying to predict how the committee will sort it all out.

The projections below are based on all games played through February 19, 2018. Following the bracket, I included a few thoughts on the last four in and first five out.

Baylor – The Bears have now won five straight, including wins over Kansas and Texas Tech at home and Texas on the road, to play their way into the field. They have a total of four quadrant 1 victories and no losses outside of the top two quadrants. Baylor also fares well in the predictive metrics like KenPom, BPI, and Sagarin, and the remaining schedule offers additional chances at quality wins with home games remaining against West Virginia and Oklahoma to go with road trips to TCU and Kansas State.

St. Bonaventure – After taking care of business in a must-win game against Rhode Island, the Bonnies have won eight straight. They are 3-2 in quadrant 1 games and 7-4 against the top two quadrants to go with seven true road victories, which the committee will look upon favorably. That being said, a pair of quadrant 3 losses and a general lack of wins over at-large caliber teams leaves St. Bonaventure with little room for error with four games remaining in A-10 play.

Washington – The weekend was a mixed bag for the Huskies, who dropped their third straight game in a home loss to Utah before bouncing back to beat Colorado. For now, wins over Kansas in Kansas City and both Arizona schools at home are keeping Washington in the field. The early bracket reveal certainly drove home the importance of quality wins in the eyes of the committee, so hopefully this selection (and especially the next one) isn’t an overreaction in that regard. The Huskies would be wise to win out with road games against Stanford and Cal followed by home dates with the Oregon schools, as the predictive metrics certainly aren’t doing them any favors.

LSU – As was the case last week, this is definitely a selection influenced by the February 12th reveal. The Tigers now have 11 losses, but they also have seven quadrant 1 wins, including road victories at Texas A&M and Arkansas. Those seven victories are huge, but it’s worth noting that LSU is 1-5 in quadrant 2 games and also has a loss to Stephen F. Austin. At some point, the sheer volume of losses will be too much to overcome, which means LSU probably needs to go at least 3-1 in remaining games against Vanderbilt at home, on the road against Georgia and South Carolina, and home versus Mississippi State.

UCLA – It was a close call for the last few spots, and if you want to put the Bruins in the field, I won’t complain. Wins at Arizona and on a neutral floor against Kentucky are their only ones against teams firmly in the field, although a trio of home wins over Washington, USC, and Utah are also helpful. Still, they are just 2-5 in true road games and are hovering around 50th in most predictive and results-based metrics. UCLA closes the season with three road games (Utah, Colorado, and USC), giving them a golden opportunity to improve upon one of the main weaknesses on their profile.

Syracuse – The Orange rebounded from a home loss to NC State by winning at Miami on Saturday and currently sit just inside the RPI Top 40. They have three quadrant 1 victories, although the aforementioned Miami win and a home victory over Virginia Tech are the only ones over at-large teams in my projected field. Winning at Louisville helps for bubble purposes, but my concern is that there just aren’t any top-end victories on the profile. That could change this week if they are able to knock off UNC at home or Duke on the road.

Louisville – It’s now been a month since the Cardinals knocked off a team in the upper half of the ACC, and that lack of quality wins has started to catch up with them. The good news is they don’t have a loss to anyone outside of the RPI Top 50, but with just two wins over at-large caliber teams, that only means so much. The Cardinals finish with three of their last four games on the road, starting with trips to Duke and Virginia Tech this week.

Marquette – After losing five of their last six games, the Golden Eagles picked up a huge road win at Creighton on Saturday night. Much like Louisville, they don’t really have a bad loss, but they’ve also swept Seton Hall and won at Providence. A win in Maui over LSU helps for bubble purposes, but like the Tigers, the overall volume of losses is hard to totally ignore. The next three games feature a home date with St. John’s and road trips to DePaul and Georgetown, and with star guard Markus Howard’s status uncertain, they need to find a way to avoid a slip-up.

Georgia – The Bulldogs had been pushed to the brink of the bubble at 4-8 in the SEC and trailing by double digits at Florida, but they managed to pull off a late comeback before winning in overtime and followed it up by knocking off Tennessee on Saturday. Georgia now has five quadrant 1 victories and is 9-8 across the top two quadrants. So what’s the issue? A trip of quadrant 3 losses as well as a road loss at Vanderbilt are the main blemishes, although their predictive metrics aren’t particularly compelling either. This week features a trip to South Carolina and a home date against LSU.