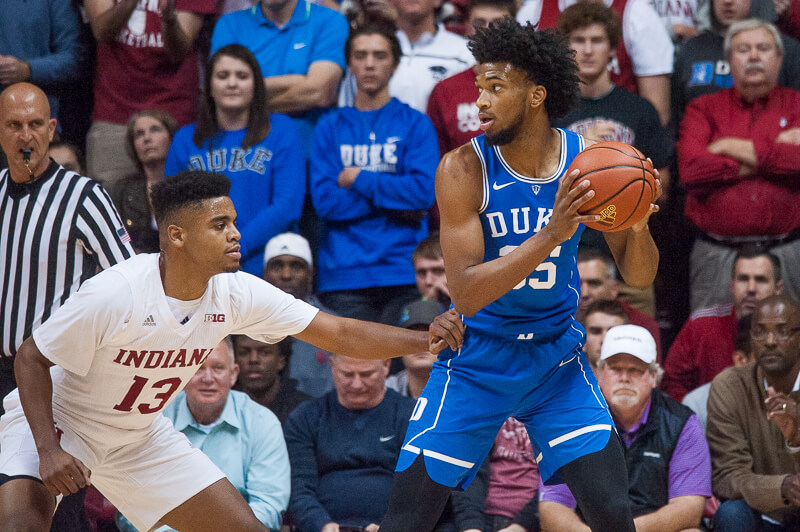 Maybe it’s recency bias, but this season feels like one of the most unpredictable in recent memory, which makes for an interesting weekly exercise in projecting the field. Throw in a big comeback from Kansas on Big Monday, and suddenly I’m reworking the seed list at 11:00 PM. The net result wound up being a pair of newcomers on the top line and five new at-large teams since last week.

Before diving into the one seeds, here’s another reminder of how the NCAA is segmenting wins this season:

Five teams were in the mix for one seeds this week. Villanova was a no-brainer for one of the spots. Purdue leads the nation in Tier 1 victories with seven, and they have no non-Tier 1 losses with Tennessee and Western Kentucky both continuing to play well. Oklahoma was the next choice thanks to a 5-2 mark in Tier 1 games following wins over Texas Tech and TCU last week.

That left Duke and Virginia for the last spot. The Blue Devils have more Tier 1 victories than Virginia, but the Cavaliers have a pair of wins over Top 20 teams while Duke has zero. Virginia’s lone loss came on the road against West Virginia, which makes it significantly “better” than Duke’s losses at Boston College and NC State. For now, UVA gets the nod, but their grip on a one seed isn’t as firm as you might think.

The projections below are based on all games played through January 15, 2018. Following the bracket, I included a few thoughts on the last four in and last four out.

Houston – The Cougars enter the field after a pair of double-digit victories last week. The loss to Drexel is an ugly blemish, but wins over Arkansas and Providence in the non-conference help to cover it up.

USC – If not for a Stanford buzzer beater, the Trojans would be riding a five-game winning streak as they head to Oregon this weekend. As it stands, a pair of Tier 1 wins to go with last week’s home victories against Colorado and Utah are enough to earn a spot in the field.

Syracuse – Road losses to Virginia and Florida State extended Cuse’s losing streak to four games and pushed them further toward the bubble. With limited quality wins on their resume, a number of close losses may come back to haunt them in the end.

St. Bonaventure – The fact that the Bonnies’ four best wins have all come in road and neutral games is the main thing keeping them in the field following a blowout loss at Rhode Island last week. It’s looking more and more like the A-10 is a one-bid league.

Georgia – Losses at Missouri and home to South Carolina dropped the Bulldogs out of the field this week, but they still have five Tier 1 and 2 wins on their profile.

Washington – A win over Kansas is sure to age well, but outside of that, the Huskies have no victories over clear-cut at-large teams. More than half of their wins fall into Tier 4.

Saint Mary’s – Stop me if you’ve heard this before, but relatively poor non-conference scheduling may hurt the Gaels’ at-large hopes. At this point, they have no Tier 1 wins and no victories over at-large caliber teams.

Boise State – The Broncos are 14-3 with a Top 30 RPI, but like Saint Mary’s, they have no Tier 1 victories. For now, they need to keep stacking wins in the Mountain West.