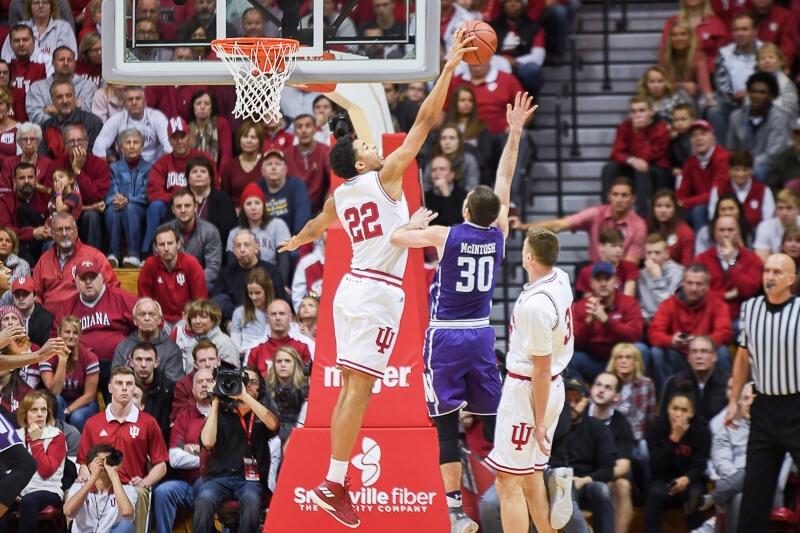 Thoughts on a 66-46 win against the Wildcats:

What a difference Juwan Morgan makes.

Saddled on the bench for the final 17:46 of the first half due to two quick fouls, Morgan was no factor in the first half as Indiana plodded along on offense. Without Morgan to work the middle of Northwestern’s zone, Indiana settled for too many 3-pointers over the top of the defense and too much freelancing instead of ball movement. Devonte Green was launching up air balls. So despite the fact that the Hoosiers held the Wildcats to a paltry .56 points per possession in the first half — some due to solid defense, some due to Northwestern’s woeful shooting — Indiana only carried a five-point lead into the break (25-19). The Hoosiers scored just .72 points per possession over the first 20 minutes in a half with some seriously ugly offense.

But with Morgan back on the court to start the second half, the game changed in a big way. Morgan set up in the middle of Northwestern’s zone and dished two assists to a cutting Justin Smith along the baseline. He scored eight points of his own in the first 8:29 of the half. With the Hoosiers still shutting down the likes of Scottie Lindsey (1-of-15) and Northwestern not getting much else from the rest of the team, Indiana threw down a serious hammer, using an 18-0 run to push the lead out to 27 at the 10:07 mark on a Josh Newkirk 3-pointer.

By game’s end, the Hoosiers jumped up to 1.02 points per possession after their strong second half. They held Northwestern to just .72 PPP, a season-low for the Wildcats.

We’ve talked about if the Hoosiers could just shoot a little better from 3-point range — say, in the mid-30s percentage wise — it could really help their cause. It wasn’t the deciding factor in this contest by any means, but they were able to do just that against the Wildcats. Indiana made 8-of-23 (34.8 percent) from distance, aided by Newkirk’s 2-of-3 performance and 5-of-11 from Robert Johnson. Johnson ripped through a couple during Indiana’s scoring barrage to start the second half. It helped him lead all scorers with 17 points.

While Indiana shot respectable from distance, this should have been even bigger than a 20-point win as it shot just 12-of-22 (54.5 percent) from the line. In a tighter game, this could have come back to bite the Hoosiers hard.

We saw the likes of Clifton Moore for the first time in Big Ten play in the first half, something Archie Miller said was coming. Moore’s presence was felt most on the defensive end thanks to two blocks. He missed his only shot attempt of the contest.

The Hoosiers have now busted out for three straight Big Ten wins, including one on the road, after the Wisconsin debacle. They sit in a tie for third with Michigan and Michigan State at 4-2 after today’s win. Friday’s trip to East Lansing will be a tough one, especially against a Michigan State team, one of the best on the country, looking to rebound after recent losses against Ohio State and Michigan — the latter of which was at home.

But regardless, Indiana is sitting well so far in conference play, today another encouraging sign of growth.