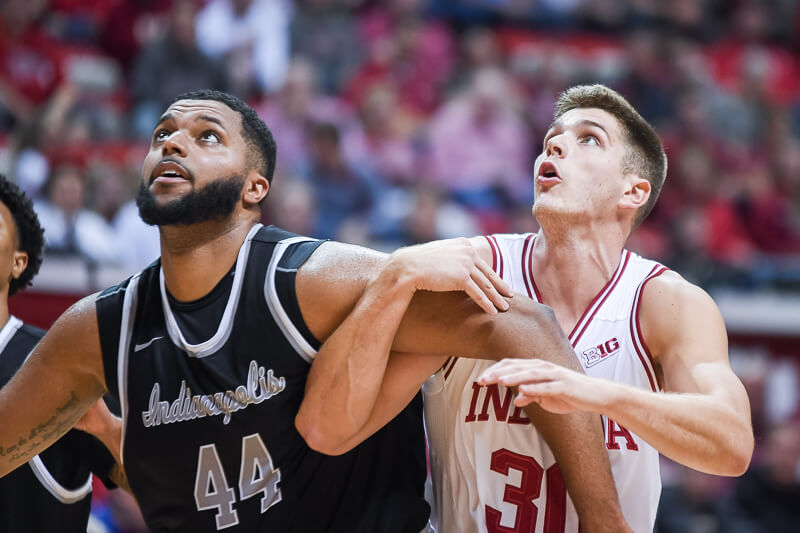 Here’s a look at five takeaways from the 74-53 win over the Greyhounds:

· The return of Collin Hartman: The last time Collin Hartman put on a uniform for game action prior to Sunday was over 19 months ago when the Hoosiers lost to North Carolina in the 2016 NCAA tournament.

Hartman, who missed the Hoosier Hysteria scrimmage and first exhibition with an ankle injury, didn’t waste any time after checking in at the 13:44 mark of the first half. Hartman hit a 3-pointer less than two minutes after checking in and finished with nine points in 16 minutes.

It was an important step for Hartman, who is expected to play a major role as a leader on Archie Miller’s first Indiana team.

“It felt good,” Hartman said postgame. “It’s been over a year since I’ve been able to put this jersey on and play against somebody else with these guys. And it really felt good to get the first one under our belt and get the ball rolling.”

· Eight turnovers and a turnover percentage below 13: When Miller took the reins in Bloomington in late March, one of the biggest on court challenges he faced was figuring out how to get his players to take care of the ball.

In his postgame comments, Miller said the goal is to stay under 10 turnovers, but added that shot selection is just as important.

“I think the one thing is the turnover number, eight, is always — anything under 10 is always what we’re gunning for,” Miller explained. “But if you add in six to eight bad shots in later-down-the-line games against good competition it’s going to turn into offense on the other side of the ball. So we have to be a little bit more mindful in shot selection.”

· Davis performs in extended minutes: De’Ron Davis wasn’t accustomed to playing extended minutes as a freshman, but Indiana needs him to emerge as a 25-30 minute a game player as a sophomore.

The Colorado native finished with 11 points, seven rebounds, five blocks and two fouls. The 24 minutes were the most he’s played in an Indiana uniform.

“De’Ron will be a guy we gotta keep out on the floor,” Miller said. “If he’s able to play 24, 25 minutes a night, it’s probably a good thing for him right now early. If he ever gets to be a guy that can play 30 then I think he’s worked himself into game shape. De’Ron has to play in games to get in game shape, and thankfully, like I told those guys, we’ve got a ton of them coming.”

Although he settled for a couple of 3s in early shot clock situations and hit just 2-of-7 from distance, Johnson put together an otherwise strong offensive performance.

He finished with a team-high 18 points and hit 5-of-8 on 2s. The Richmond (Va.) native also had just one turnover in 26 minutes.

As we wrote in his player profile last week, Johnson needs to figure out ways to get to the foul line more frequently. In 52 exhibition minutes, he attempted just three free throws.

The return of Al Durham and Collin Hartman saw Justin Smith, Zach McRoberts and Clifton Moore play less in the second exhibition. Miller said that the coaching staff will look at things this week to get a better idea on the direction forward for distributing minutes.