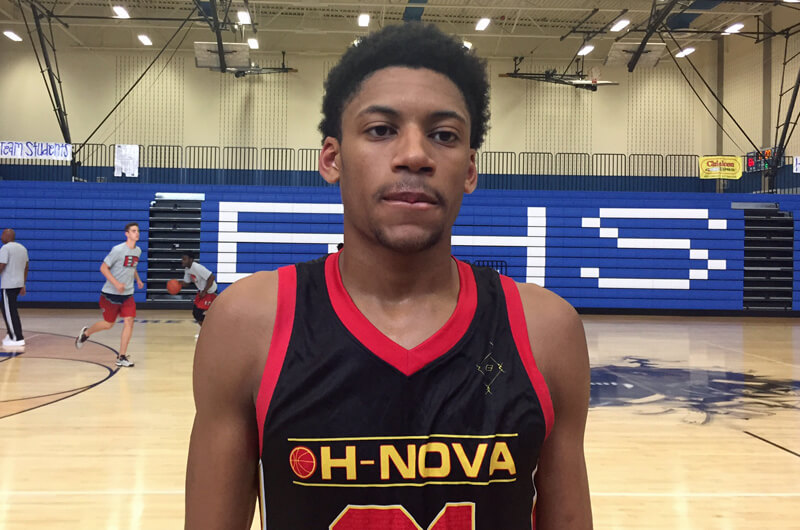 FORT WORTH, Texas – Jerome Hunter, a class of 2018 forward from Pickerington North (Ohio), was a recruiting target for Archie Miller at Dayton.

It appears that Miller and the new Indiana staff will continue to recruit Hunter in Bloomington.

Miller and Ed Schilling both watched Hunter and Team Nova over the weekend in the adidas Gauntlet silver division during the first April evaluation period.

Hunter is rated the No. 104 prospect nationally by the 247Composite and is considered a four-star prospect.

“I went to a team camp and he offered me a scholarship there (at Dayton),” Hunter said over the weekend. “And now that he’s got the new job at Indiana, he just started talking to me.

The 6-foot-7 is a priority for several programs in the Big Ten and midwest footprint.

He declined to list of schools involved in his recruitment when asked on Saturday because he didn’t want to leave anybody out. However, Hunter did say that he’s open to being recruited by anyone at this point.

“I’m open to going anywhere,” he said. “I’m just looking for the right fit. Academics, the coaching style, the players, who I’m going to be playing with.”

With his size, length and versatility, Hunter should be able to play both forward spots in college.

“I can play inside-out,” he said. “Put me on the wing, put me on the block, it really doesn’t matter.”

As far as the Indiana interest goes, Hunter said he’s interested in learning more about the program, but spoke highly of Miller and the relationship they’ve built to this point.

“When I’ve talked to him, he seems really cool and like a really good coach,” Hunter said. “I’ve heard a lot of good things about him.”