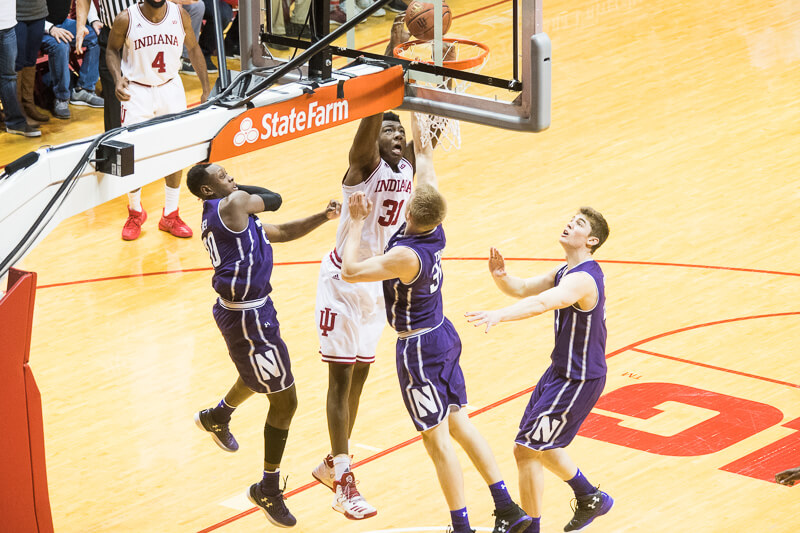 In a season chock full of twists and turns, Saturday’s home finale provided the most unbelievable chapter yet.

And unlike most of the recent chapters of the 2016-17 IU basketball season, it had a happy ending.

The game had all of the same ingredients we’ve come to expect from the Hoosiers. Spurts of brilliance and spectacular individual feats were often canceled out by extended sequences of mind-boggling mistakes and turnovers, poor communication and missed defensive rotations.

As a result, the Hoosiers found their backs to the wall. But this time, they delivered. In fact, they did so twice.

The first time the Hoosiers found themselves struggling for answers came less than six minutes into the game.

Yet another slow start placed them in an all too familiar position, down 26-14 with 5:30 still left in the opening frame and forced to call a timeout.

But the Hoosiers responded to end the half, scoring the next 22 points to head to the locker room with a 10-point advantage.

It was the type of commanding run not seen since the 28-0 burst last season in Ann Arbor.

The boost to the scoreboard was obvious, less so was the heightening of morale and confidence that Indiana has been missing since the slide began.

Before the Hoosier’s put up 22 unanswered, the only player with much in the way of enthusiasm was Thomas Bryant.

Bryant was his usual self, dancing on the bench and pumping his fist when teammates scored.

It wasn’t until the start of Indiana’s run began that Bryant’s passion became infectious, with Devonte Green becoming the first Hoosier to show symptoms.

With just over five minutes left in the half, Green received a pass from Josh Newkirk on the right wing. After using a pump fake to put Isiah Brown out of position, Green calmly nailed a step-back three (it was initially ruled a two before being changed upon review).

Two possessions later and with the Hoosiers still down eight, Green grabbed a Bryant McIntosh miss. Green proceeded to dribble behind the back, strut down the open court, and crossover McIntosh before feeding Bryant for an and-1.

On the following possession, Green found a trailing Newkirk, who knocked down a three of his own. As the two high-fived, a smile was evident on each of their faces.

It wasn’t long before James Blackmon Jr. and Juwan Morgan came to life as well, as each made key plays during the stretch.

Before long, Indiana was in complete control. Northwestern had the chance for one final shot to regain momentum before the break. But a Vic Law miss was rebounded by Green just inside the free throw line with under two seconds to go.

From there, Green took one dribble and threw up a 70-foot heave. Somehow, the shot found its way into the basket.

This is how you finish a 22-0 run to go into halftime… @ChefBoyArGreen https://t.co/MAqt2rJJpC

Green stood at center court, surrounded and embraced by teammates.

Thomas Bryant let out a yelp. Morgan gave him a chest bump. Freddie McSwain leaped in jubilation. De’Ron Davis smacked Green’s hips as if he was a boxing trainer preparing him for a fight.

The entire team had managed to encapsulate the spirit of Thomas Bryant.

“(Devonte) brought a lot of confidence to the game,” Blackmon told reporters after the game. “He made confident plays and big plays and it got us going.”

When the second half began, the infectious energy had vanished.

In its place, Indiana’s old demons once again returned.

During the opening 10:03 of the final half, Northwestern outscored Indiana 23-6. Over that span, the Hoosiers committed four turnovers, settled for contested shots, and struggled to defend. When Indiana did contest Northwestern shots during that stretch, they almost always ended up fouling. Northwestern was only 12-for-18 from the charity stripe for the night but went 9-for-10 over that stretch.

The Hoosiers were able to stop the bleeding but struggled to put a dent into the lead they had allowed Northwestern to retake.

Time was beginning to run out.

Moments after the final media timeout, Bryant McIntosh banked in a 3-pointer. The game clock read 3:11 and the Hoosiers were down 61-53.

Fans started heading for the exits.

A sixth straight was defeat was staring Indiana in the face. Unless they could find a way to rekindle the same energy they mustered at the end of the first half, the season would continue plummeting downhill.

Somehow, the Hoosiers found a spark, outscoring Northwestern 10-1 throughout the final stretch.

Although Indiana’s first made field goal over the span didn’t come until 93 seconds remained, the defensive intensity increased significantly.

Northwestern came close to knocking down a shot down the stretch, but for once, the Basketball Gods chose to side with Indiana.

This was no more evident than the final Indiana offensive possession of the game.

The Hoosiers were trailing by two and just nine seconds remained on the clock when Blackmon grabbed the rebound off a McIntosh layup attempt.

Coach Tom Crean appeared to want a timeout, but Blackmon had other ideas.

“I heard the bench calling timeout, but I was already in my move so I just went with it and tried to be confident,” Blackmon said.

Personifying the same spirit that the team took on at the end of the first half, Blackmon hurried up the floor.

When he got to the low block, Blackmon was double teamed, leaving Thomas Bryant open right under the basket.

Blackmon, with nowhere to go, found Bryant with a bounce pass across the paint. Bryant then threw down the game-tying dunk while being fouled in the process.

“I saw two or three (Northwestern players) coming at me, so I knew (Bryant) was going to be at the right spot and that’s what we work on,” Blackmon said. “He wedged it and it was a perfect play.

The ensuing free throw from Bryant was an adventure in itself.

After Northwestern took a timeout in an attempt to ice the big man, Bryant, a 73 percent shooter from the stripe on the year, made his way to the line.

The normally hyperactive Bryant appeared calm, at least on the outside.

Somehow, someway, the way the ball bounced off the backboard placed it into the nylon.

How? I have absolutely no idea.

“To be honest, Coach just told me to stay straight up and shoot it just like it was normal,” Bryant told BTNs Jon Crispin immediately after the game. “I felt a little bit off, but I stayed with the follow through and it went in for us.”

A stroke of luck? You can certainly call it that.

But for a team that hasn’t had any in the weeks, Indiana will gladly take it.

Right after Bryant’s free throw found its way into the net, BTN switched over to a shot of Hartman.

A smile crept over his face as he pumped his fist on the bench. It looked to be an expression of both joy and relief. He knew what came next, even if most in attendance didn’t have a clue.

When it was time for the team’s lone senior to give his speech, the majority of the crowd had already funneled out.

Those that remained were treated to one of the wildest senior night speeches in recent memory.

The entire speech is available here and is well worth your time, but the part that will be remembered most came at the tail end.

Collin Hartman may not have logged a single minute this season, but the words he spoke in Assembly Hall on Saturday night will be a part of Indiana lore forever.