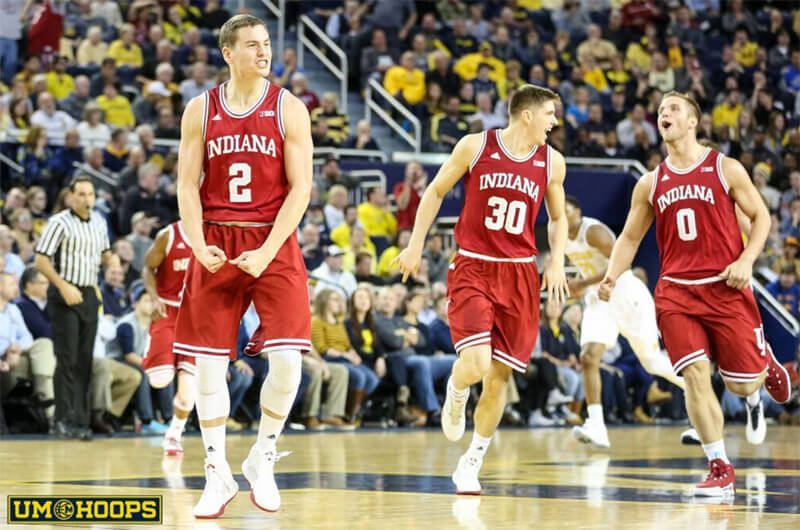 ANN ARBOR, Mich. – Indiana moved to 19-4 overall and 9-1 in the Big Ten in impressive fashion on Tuesday night as the Hoosiers dismantled Michigan at the Crisler Center.

Here’s a look at five takeaways from the win over the Wolverines:

· This was Indiana’s most complete performance of the season: The Hoosiers destroyed Ohio State, Illinois and Northwestern in Assembly Hall, but the performance on Tuesday night was their best effort so far this season.

After falling behind 15-4, Indiana outscored Michigan 41-9 the remainder of the first half. The Hoosiers had a 28-0 scoring run against a team that came in with one of the top 15 offenses in the country. This wasn’t just an offensive outburst from the Hoosiers, the defense was right there as well. Indiana held Michigan below one point per possession (.97) for the first time in conference play.

As the Wolverines missed shots and the lead started to balloon, it was clear Michigan’s confidence started to dwindle. And Indiana’s confidence grew with every made shot.

“They were a better team. Look at their record, they’re a really good basketball team,” Michigan coach John Beilein said in his postgame press conference. “And they were better than us tonight.”

Some of the numbers during that stretch are hard to believe given how explosive both teams are offensively. The Hoosiers had seven different players score while Michigan had six different players miss shots. Indiana hit 5-of-8 of its 3s while Michigan missed all four of its shots from distance. Twelve of IU’s points during the run came in the paint.

Yogi Ferrell had six of his 17 points during the run and four of his nine assists.

“We had some open shots and missed them,” Beilein said of the run. “And they’re tremendous in transition. We kept getting the ball on the zero yard line and they kept getting it on the 35.”

· Anunoby’s length gives Irvin major problems: One of the keys coming in for Indiana was slowing down Michigan junior Zak Irvin.

The Hamilton Southeastern product did finish with a team-high 16 points for the Wolverines, but 13 of those came when the game was already out of reach in the second half. The primary reason for Irvin’s struggles? The defense of IU freshman OG Anunoby.

Anunoby’s length bothered Irvin, who shot just 1-of-8 from the field in 19 first half minutes. His shots came up short and when he drove to the bucket, Indiana had more length waiting there to contest shots.

“Absolutely huge,” Tom Crean said of Anunoby’s performance. “And I think the length was crucial. Juwan (Morgan), the same thing. Our guys responded to their matchups.”

· Bielfeldt is all smiles in homecoming: Max Bielfeldt was all smiles before the game as he greeted his former teammates on the floor of the Crisler Center.

But not even Bielfeldt could have imagined coming into Ann Arbor and leaving with such a definitive win. The graduate senior finished with five points (2-of-8 shooting) and seven rebounds and was genuinely excited in the aftermath in talking about the effort he and his teammates put forth in the victory.

“Just getting the win was so awesome,” Bielfeldt said. “We played an incredible team game together. Everyone brought something different. It was so much fun to be out there and the energy was great.”

After turning it over five times through the game’s first eight-plus minutes, Indiana had just seven turnovers over the next 32 minutes for a final turnover percentage of 17. With the exception of the Rutgers game and the two Wisconsin games, Indiana has posted a turnover percentage lower than 20 in its seven other league games. It’s a trend that will need to continue as the schedule becomes even more difficult over the final eight games.