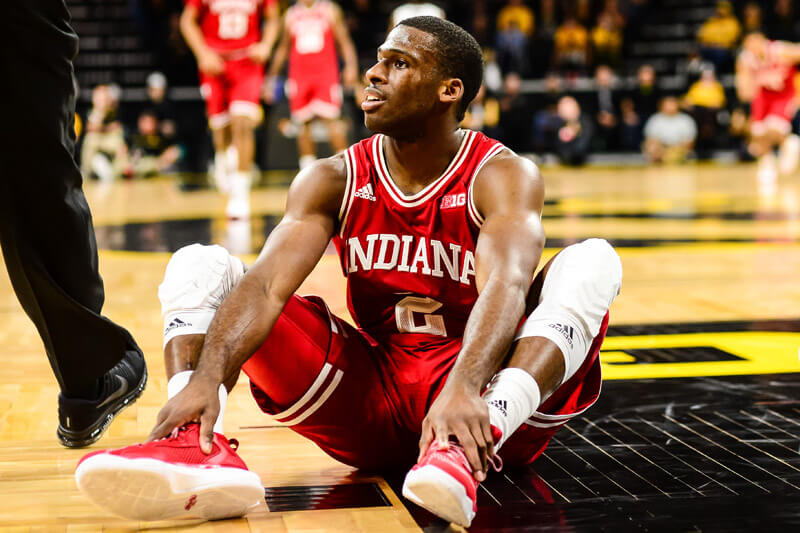 Another game the Hoosiers seemingly had in control down the stretch on the road, and yet another one they threw away.

Against Minnesota, some failed box outs from the Hoosiers — and some fortuitous movement from the Golden Gophers on their final possession — sunk Indiana in a game they led for nine of the final 10 minutes of the contest. Tonight, the Hoosiers sprinted out to a 17-4 lead as Josh Newkirk and James Blackmon Jr. banged home 3-pointers. Fran McCaffery was so angry with how his team started the contest that he pulled his five starters for five fresh Iowa bench players. The Hawkeyes were able to battle back and make a game of it, but Indiana continued to lead the entire way — and even had an eight-point lead with just under five minutes to go in the contest — until a Tyler Cook dunk and and-1 with 2:10 to go put the Hawkeyes up two at 73-71.

The Hoosiers were able to stick in there and get the game to overtime, as Josh Newkirk sunk two big free throws with 25 seconds to go to tie the game at 75. Thomas Bryant got away with a foul at the buzzer on Cook’s attempt and we went onwards to overtime.

But the final five minutes were a microcosm of all the plagued the Hoosiers in this one. Indiana simply had no answer for Peter Jok all game long. It was a masterful performance from the Iowa senior. When Jok wasn’t hitting shots when he was freed off the baseline to the perimeter (6-of-12), he was living at the line drawing fouls against the Hoosiers. Jok capped off his evening by scoring a ridiculous 15 points in the overtime frame — with 11 of those coming from the line. The senior ended the night 22-of-23 from the charity stripe, setting an Iowa record in the process. He finished with a game-high 35 points.

Late turnovers in the second half helped Iowa get it to overtime and Indiana continued with its carelessness in the overtime period, as it turned the ball over three times. McCaffery had his Hawkeyes pick up the Hoosiers in the backcourt and employ a trap at halfcourt for long stretches of the contest. The Hoosiers are already turnover prone and this defense made them even more so, as their turnover percentage of 25.9 was above their season average. And even when Indiana broke the trap line of the defense and got the ball deep into the frontcourt, the Hoosiers sometimes made bad decisions on the baseline for turnovers. And as Zach Osterman noted on Twitter, this defense also just completely wore down the Hoosiers by the extra frame as they limped to their fifth straight loss.

The numbers are now starting to look pretty ugly. Indiana is tied for 12th in conference with Ohio State, just one spot ahead of Rutgers in the Big Ten cellar. It’s now impossible to finish conference play with a winning record. And at just two games above .500 overall, there’s evidence to support the fact that an invite to the NIT is far from a guarantee.

Northwestern has struggled of late and the Hoosiers get the Wildcats at home on Saturday night. Can they stop the bleeding or is a sixth straight loss on the way?