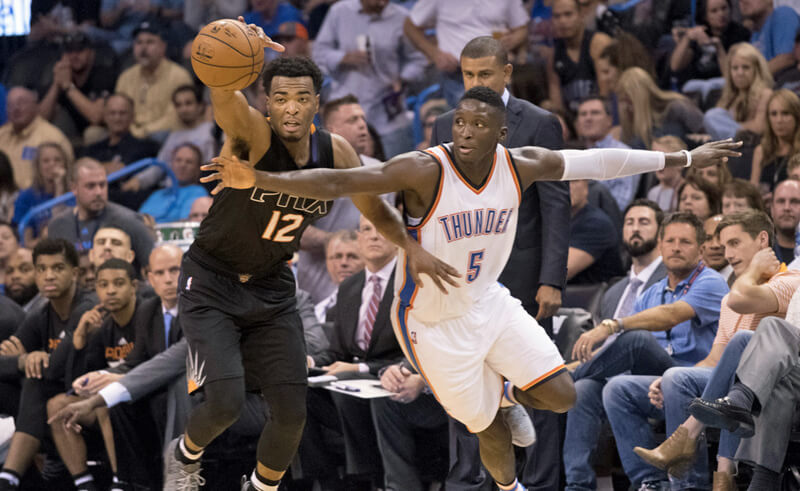 Monday was the deadline for NBA teams to sign players beginning their fourth season to contract extensions. Both Cody Zeller and Victor Oladipo came to terms on new contracts, which means both players will avoid restricted free agency next summer.

Oladipo, the No. 2 pick in the 2013 draft, agreed to a four-year, $84 million extension with Oklahoma City. The former IU All-American was a part of an offseason trade from Orlando to Oklahoma City in exchange for Serge Ibaka.

“He is such a tribute not just to Indiana, not only to D.C. and DeMatha, not only to his friends and family, but he is the kind of person you look at and say, ‘I get why he’s successful,'” Tom Crean said on Monday. “And I would doubt very much that $21 million a year is going to change any outlook that he has.”

Through three games with the Thunder, Oladipo is averaging 17 points, 3.7 rebounds, 2.3 assists and one steal per game.

Zeller, the No. 4 pick in the 2013 draft, agreed to a four-year, $56 million extension with Charlotte, where he’s played his entire NBA career.

He missed significant time this preseason with an injury, but is expected to rejoin the starting lineup for the Hornets when he’s back to 100 percent health.

In three games this season for the Hornets, Zeller is averaging 10.7 points, five rebounds and 1.7 blocks per game.

“Maintaining and building our young core of players has been a key goal for us the last few years,” Hornets general manager Rich Cho said in a release.  “We’re excited that Cody will be part of the Hornets organization for years to come. Cody is a hard worker, a team-first player and a versatile talent that was a large part of our success last year. He has improved in each of his three seasons in the NBA. We look forward to a bright future with Cody as a part of the roster that we are continuing to build.”