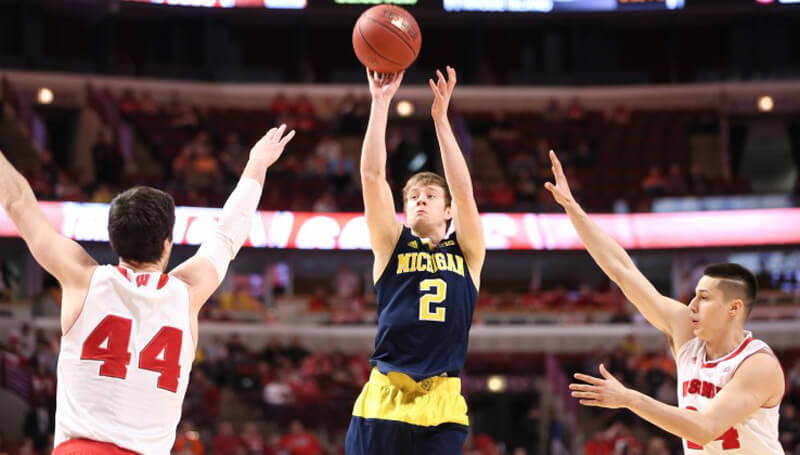 According to a report from Jeff Goodman of ESPN, Michigan graduate transfer Spike Albrecht is down to seven schools and Indiana is one of his potential destinations.

Joining the Hoosiers in the running for Albrecht are Purdue, USC, Milwaukee, Syracuse, Wichita State and Texas A&M.

Michigan initially announced that it would block Albrecht from transferring to another Big Ten institution, but later rescinded the restriction after public backlash.

As long as the conference grants a waiver for Albrecht to join another Big Ten program, which it did last year with Max Bielfeldt, he would be eligible immediately at either Indiana or Purdue.

According to multiple posts on Instagram, Albrecht was in Bloomington this past weekend for Little 500.

Originally from Crown Point, the 5-foot-11 Albrecht signed with Michigan in 2012 out of Northfield Mount Hermon prep school in Massachusetts.

He scored 17 points in the 2013 national championship game against Louisville and averaged 3.9 points over 115 games at Michigan.

His health, however, is a question mark moving forward as he appeared in just eight games this season for the Wolverines due to hip issues. In a recent interview, Albrecht said he’s 85 percent recovered from double hip surgery that ended his senior season at Michigan.

“I got another doctors appointment in two to three weeks,” he said on April 13. “I want to make sure I’m 100 percent healthy and that I don’t just come back to come back. I want to come back healthy and able to help a team.”

Indiana is currently full on scholarships for the 2016-2017 season, but that would change if Troy Williams opts to stay in the NBA draft or another player opts to transfer.

The Hoosiers are currently hosting junior college forward Freddie McSwain on an official visit. McSwain, who is also considering Kansas State, is expected to announce a decision on April 24.

Indiana has actively recruited the graduate transfer market in recent seasons. In 2013, the Hoosiers added Evan Gordon from Arizona State and in 2014, IU added Illinois State transfer Nick Zeisloft, who had two years of eligibility remaining.

And last summer, Indiana added Bielfeldt, who went on to win the Big Ten sixth man of the year award, from Michigan.