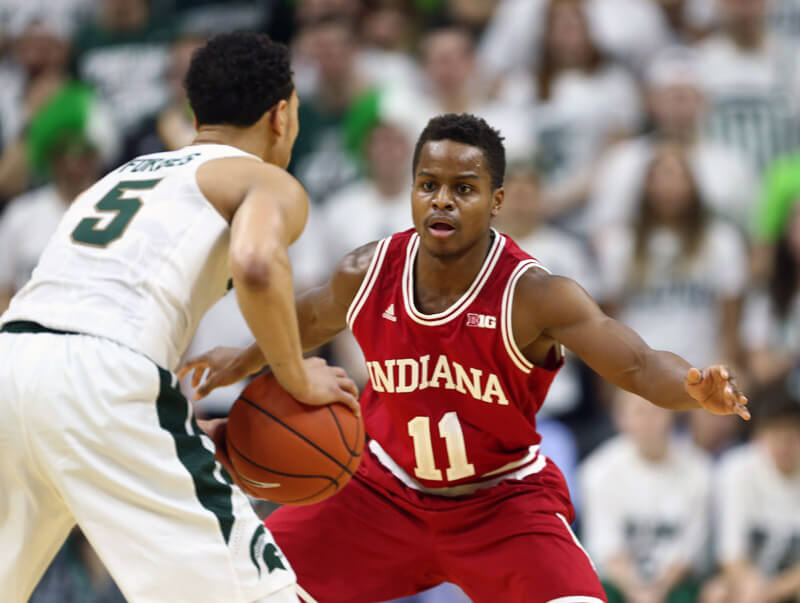 Out of the gate, Indiana went toe-to-toe with the Spartans as both offenses fired on all cylinders. The Max Bielfeldt (15 points, 10 rebounds) insertion into the starting lineup for matchup purposes looked like a stroke of genius. He hit in the paint and from distance and kept MSU off the glass as the Hoosiers got hot early.

OG Anunoby came in and did OG things. A drive and rim rattling dunk through the paint. A steal and score in transition. The 3-ball was falling for a number of Hoosiers (7-of-16) in the first half and it helped them jump out to a 10-point lead at the 7:58 mark. While they trailed by one at the break (41-40) after the Spartans closed the half on a run, there was no reason to think Indiana wasn’t going to be competitive in the second half and make the Spartans work for the W.

Or maybe even steal a victory in East Lansing if it got some breaks.

But the wheels completely fell off in the second half and Indiana will be licking its wounds as the wheels go up back to Bloomington today. The Hoosiers couldn’t buy a bucket after the break (10-of-31) and its offense went flat. Ferrell’s early pull-up transition 3 was a good omen at the top of the contest. But he missed the other five 3-pointers he attempted and his overall shooting was poor yet again today (3-of-10). Indiana survived his rough offensive performance on Thursday against Iowa because the supporting cast stepped up at home. But on the road against MSU, it was a whole different story.

As Indiana continued to miss shots, its energy sagged. There was less movement and passing. And it affected their resolve on the other end. As Alex noted in At The Buzzer, the Spartans scored 1.47 points per possession in the second half. Indiana lost shooters in transition. Its dominance on the boards in the first half was neutralized in the second as the Spartans got rebounds and putbacks.

And then here came Denzel Valentine and Matt Costello to deliver the knockout blow for the Spartans as Indiana just laid on the canvas until the final horn sounded. Valentine (30 points) was absolutely sensational this afternoon. When he wasn’t getting by Hoosiers or hitting 3s (5-of-8) in their faces, he was setting up teammates time and again (13 assists). Costello was a hyper-efficient 10-of-12 for 22 points. He added 11 boards and three blocks and a dagger 3-pointer at the end of the shot clock, celebrating like a mad man as he made his way back down the court.

Troy Williams was utterly forgettable in this one (0-of-5, zero points, two turnovers) in 20 minutes and he’s now averaging just 1.3 points on 2-of-11 shooting in his last three outings against the Spartans.

I’m not the first to bring it up, but it’s fair to ask at this point why the steady and defensive-ready Anunoby isn’t seeing more floor time than Williams as he’s unable to shake Bad Troy out of his system consistently. Williams has the athleticism to do great things. But he simply hasn’t proven he has the skills or basketball smarts to translate that into positives for the Hoosiers enough this year with the ball in his hands.

Other than the Iowa game on March 1 in Iowa City, this was on paper about the most difficult conference game for the Hoosiers. A win wasn’t expected. Still, neither was such a collapse in the second half. But Indiana showed an ability to rebound at home after a tough road loss this past week when it beat Iowa after the Penn State debacle.

The Hoosiers will need a similar rebound this week as the Cornhuskers and Boilermakers come to Bloomington.