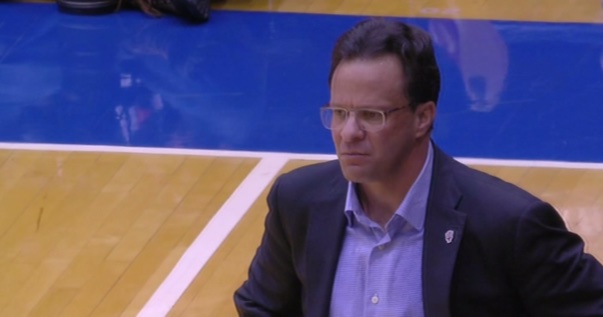 No one expected victory at Cameron Indoor Stadium. 120 straight non-conference wins. The No. 1 offense in the country. The Duke and Coach K mystique. It’s a lot to overcome.

So all the IU faithful asked for was to keep it somewhat close, keep it competitive. Show that Maui was an aberration, not the norm. It started out the way fans hoped. Indiana was locked in offensively. The Hoosiers looked confident. They led for almost an eight-minute stretch during the middle of the first half. They were barely turning it over and this was just the type of performance that could put it all at ease.

But the wheels fell off and the Hoosiers stumbled to another embarrassing defeat. Where it started to go wrong: The Hoosiers failed to defensive rebound and the Blue Devils got second and third chances on possessions for scores. It led to 14 second-chance points in the first half. Freshman Brandon Ingram was straight fire. He scored 18 points on 7-of-8 shooting before the half.

But the second-chance points and Ingram’s performance weren’t the only reasons Duke built a nine-point halftime lead (51-42).

Because Indiana’s defense keeps going wrong. It’s a flat out atrocity. Yes, Duke sports the best offense in the country. But if you allow 1.62 points per possession and 51 points at the break, your offensive onslaught has to even more ridiculous. And Indiana’s simply wasn’t.

Where it went from bad to embarrassing: Indiana’s start the the second half. Duke busted out to a 20-point lead because the Hoosiers failed to score until the 15:08 mark on a pair of Yogi Ferrell free throws. The confidence and focus Indiana displayed to start the contest was gone on that side of the ball. With the game in balance, the Hoosiers didn’t step up to the plate. Duke had taken over and there was just no coming back.

From there, Indiana’s offense — thanks to some spirited play from Troy Williams (17 points) — got back on track a bit. The largest lead the Blue Devils got out to was 25 points before it settled back down to 20 at the final buzzer.

But the uptick in offense didn’t matter because the defense continued to disappoint in so many ways. Duke got a ton of wide open 3-point shots (11-of-24 on the night) because Indiana’s perimeter defenders spent the night in confusion and out of position. And when Duke got to the bucket, IU’s bigs seemed disinterested in mixing it up. Indiana sprinkled in some zone tonight and that didn’t help at all. Said one basketball writer on Twitter: “Looks like Indiana is trying to play a complicated match up zone that they just learned for this game.”

When it’s not one thing (the turnovers), it’s something else (the defense) so far this year. Indiana now stands at 5-3 on the season and it’s fair to ask at this juncture if this team with so much talent is going to be spending the season on the bubble.

In front of influential IU boosters, the Hoosiers got mauled. There is no balance on the other side of the ball to keep the Hoosiers going when the offense fails. No counter punch when they can’t buy a bucket. These Hoosiers simply don’t defend.

And if it doesn’t get any better, the temperature will rise in Bloomington.