The Minute After: Alcorn State 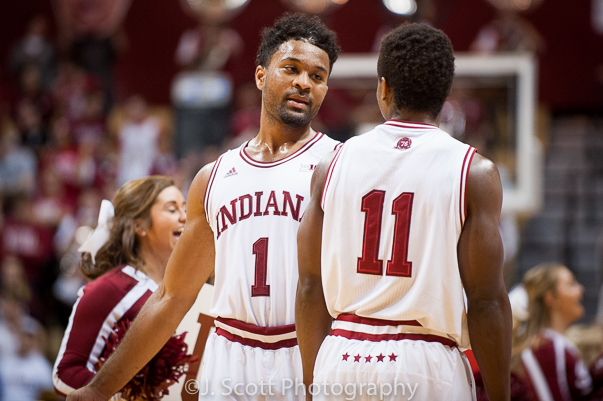 The James Blackmon Jr. offensive assault impressed. The Troy Williams highlight alley-oop did, too. But as the Hoosiers entered half time tonight, all those lingering doubts remained.

Despite scoring 1.51 points per possession and sporting an effective field goal percentage of 88.5, the turnovers and defense continued to plague this talented squad. An entry pass to Thomas Bryant resulted in a turnover. Trying to go for the home runs instead of the singles to close out the half — a Williams alley-oop pass to Yogi Ferrell comes to mind — resulted in a few more. The Hoosiers entered the locker room turning it over on 22.8 percent of their possessions. It was just a touch better than their season average of 23.9 percent, which ranked 338th in the country coming into the contest.

Indiana’s defense also left much to be desired. It failed to to control the boards, as Alcorn State rebounded 52.2 percent of its misses for 12 second-chance points. The Braves scored off weak Indiana transition defense and the uncontested drives off the perimeter to the rim happened, too. At half, Indiana allowed .97 points per possession to a weak offensive team averaging .91 points on the season.

But the Hoosiers cleaned things up in the second half and cruised to an expected 42-point victory.

Now, to be clear: The defense wasn’t really any better. Indiana allowed .99 points per possession for the game against a team entering the contest with the 342nd most efficient offense in Division I. So it was actually a little worse after the break.

But as I wrote in my final TMA from Maui, if you can shore up the silly turnovers, it can go a long way to covering up the defense and lead to Ws. It gives this high-powered offense more opportunities to put the ball in the hole. An ideal Indiana team takes care of the ball and plays better defensively. But for a night, at least it cleaned up the turnovers. Its turnover percentage of 17.0 was its best of the season and IU turned it over just four times in the second half. It helped them outscore the Braves by 23 points (59-36) in the second frame despite some ho-hum defense.

Blackmon Jr. was unstoppable tonight. He had 24 points at the break. By game’s end, Blackmon Jr. finished with 33 points, both a career-high and the most points scored by an IU player in the Tom Crean era. It was a balanced attack for Blackmon Jr. He hit 6-of-9 from distance and 5-of-6 from 2-point range. The sophomore also shot a perfect 5-of-5 from the line. He added four steals and just one turnover.

It wasn’t a wire-to-wire performance. And the defense is still a concern. But for a night Indiana took much better care of the ball and it led to an expected winning margin — more than could be said for its two losses in Maui.