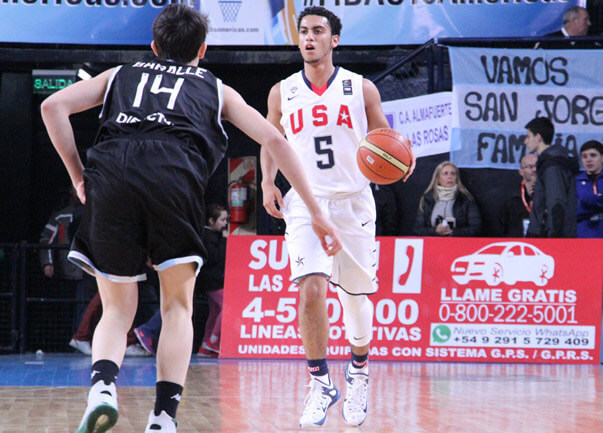 Class of 2017 point guard Markus Howard, one of the top players nationally at his position, was on campus in Bloomington for an unofficial visit on Sunday.

Accompanied by his mother, Noemi and his father, Chuck, who played football for IU in the 1980s and graduated from the university, Howard said this visit felt different than others because of his father’s familiarity with the campus.

“It was cool to be where he was at when he went to school and just see how excited he was to be there,” Howard told Inside the Hall on Sunday afternoon. “It was definitely a different feel than any other visit because he knew everything that was there.”

Howard, rated a five-star prospect by ESPN.com, was one of the standouts of the Nike Elite Youth Basketball League (EYBL) this past season. In 19 EYBL games, he averaged 20.2 points.

He was also the second leading scorer on the USA Basketball Men’s U16 National Team that won gold in the FIBA Americas Championship in Bahía Blanca, Argentina in June. Over five games in that event, he averaged 16 points, three rebounds, two assists and two steals in 18 minutes per game.

This was his first visit to Indiana and came a day after an unofficial stop at Marquette. Howard will also visit Baylor on August 6. With 16 scholarship offers, Howard said he is using these trips to get more familiar with the coaches and programs that have offered him.

“It was great talking with the whole staff and everybody just showing me around, showing me where the program is heading and everything,” he explained. “It was awesome. We sat down and went through some of my film and some of the team’s film. It was really good to see how they played and see some of the things that I need to work on in their eyes. It was a really great overall trip.”

One of the highlights of the afternoon for Howard was a look at Assembly Hall, which is currently in the midst of renovations totaling $40 million.

“The campus is beautiful. Assembly Hall was really big,” Howard said. “It was definitely just cool to see how big it was and where they play. It was just awesome to be able to see that first hand.”

Great visit today @IUBB_Hoosiers thanks to all the coaches and staff that showed me a great visit???? pic.twitter.com/yvqUrH6B60

The 5-foot-11 Howard is transferring to Findlay Prep in Las Vegas for his final two season of high school after previously starring at Gilbert Perry in Arizona.

Howard said two other takeaways from the visit were his interactions with new strength and conditioning coach, Lyonel Anderson, and also getting to spend time with Tom Crean.

“Lyonel was there mostly the whole visit,” he said. “I really liked him and really liked getting to know him. He was just talking about what a great a place Indiana was, so it was really great to pick his mind and see what he thought about the university and everything. Just a great guy.

“Coach Crean is a great coach, great basketball mind. He knows the game very well. I can tell that his players learn a lot from him. He’s just a great person.”