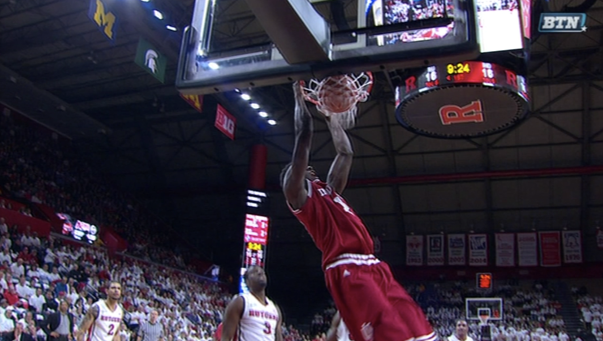 Thoughts on a 84-54 win against the Scarlet Knights:

The mental makeup of this Indiana squad has proven to be pretty resilient this season. And so any lingering effects from the Purdue loss simply didn’t manifest at The RAC on Sunday evening. Indiana took care of business in a big way against a Rutgers squad coming in losers of 10 straight en route to a 30-point blowout.

The Hoosiers started the game shaky with four turnovers before the first media timeout. But they carried a 10-point lead (40-30) into the break. A 9-0 run to start the second half opened the floodgates and the rout was on. James Blackmon Jr. (17 points, seven rebounds) paced the Indiana offense in the first half on some nice scores at the bucket and behind the line. Hanner Mosquera-Perea was active from the onset and it helped him get to the line eight times this evening. He made seven of those attempts and went 3-of-3 from the floor — including a nice finish on a pick-and-roll with Yogi Ferrell — to end the contest with a career-high 13 points.

Ferrell played the role of distributor in the first half but exploded offensively after the break. He tied Blackmon Jr. with a team-high 17 points to go along with six rebounds and six assists. The Hoosiers didn’t shoot it particularly well from distance up through the beginning of the second half, but started dropping more as the lead ballooned up during the rest of the contest to shoot close to 40 percent from distance (10-of-27, 37 percent). Nick Zeisloft hit 3-of-4 from deep and added a 2-point jumper as the shot clock expired in the first half to finish with 13 points.

Indiana finished with 1.21 points per possession and a 62.1 eFG%. Not its best offensive performance of the season, but a strong one that propelled them to a lopsided victory.

Indiana’s defense held Rutgers to just .78 points per possession. But Rutgers came into the game with the league’s worst offense and played a bit apathetic at times — looking like a team that hasn’t won a game since Jan. 11. Its win over Wisconsin seems even more bizarre now as the Scarlet Knights are losers of 11 straight after tonight’s loss.

Indiana got up by so much in the second half that we got to see a garbage time lineup that hasn’t reared its head since the non-conference with Max Hoeztel playing point guard. Jeremiah April — a player some Indiana fans have been calling to see on the court — scored four points during this stretch thanks to a putback and a catch and finish. And the IU faithful were finally graced with some Priller Time. It had been too long.

Next up for the Hoosiers is a Wednesday tilt with the Wildcats up in Evanston. They’ve won three straight against Iowa, Minnesota and Penn State. That Penn State win was by 21 points on Saturday.

It’s another winnable road contest as the Hoosiers try and close in on lock status for the NCAA tournament, but the Wildcats are not to be taken lightly.