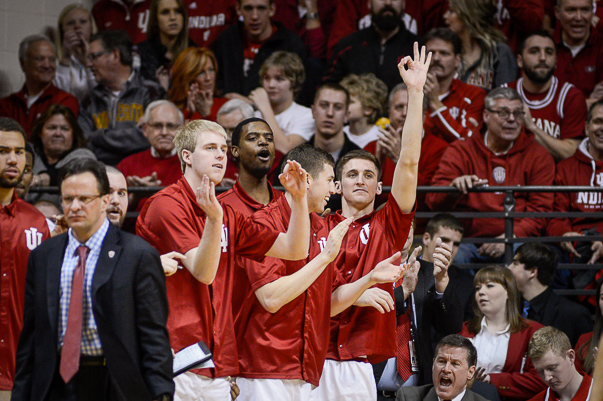 The Big Ten held its weekly coaches teleconference on Monday morning to review the seventh week of conference play. Here are some notes and quotes from Tom Crean’s appearance:

On how important it will be to have Hanner Mosquera-Perea available against Purdue:

“Well I think it’s extremely important because it just provides a different kind of length and size. But we have got to do a really good job of moving our post defense around and we have got to do an even better job this time of moving Purdue around when they are on defense. And we are looking forward to that and really pull them into a position where they have got to guard more of the court or make a decision if they are going to guard more of the court. But bottom line is you can’t give inside players like A.J. Hammons and Isaac Haas any one steady diet. They’re very good at maneuvering and making moves and making counter-moves.”

“I think those are fine. It’s just getting a comfort level and needs to be more vocal, especially looking at last night. And more proactive on the defensive end in the sense of getting in position quicker. He got caught a couple times behind. And just active would be the key word because he’s certainly capable of that and that’s what he’s got to do — especially defensively.”

On Jordan Fuchs and if he can help create post depth:

“Oh, absolutely. And the one thing that it gave Jordan — he didn’t have a lot of success in the time that he was on the court, but it was only a minus-one on the plus-minus, which is good. But the most important thing was that he got that initial experience and he got on the court. And it wasn’t a predetermined decision not to play him in the second half, it was just the way that it worked out. But this will be a big week. It’s his first full week with us, even though he was in for a lot of it last week. But bottom line is I think he’ll get better every day. He’s doing a lot of extra work and at the same time doing what he needs to do in football. And so I definitely think he’ll gain confidence, that he’ll gain technique and the fundamentals will come back to him even that much more. But the most important thing is what we told him last night after the game, is we need him to be a competitor, the athlete, the tough guy that he is and let the rest of it come from there. And I think after that initial time last night of playing, it will be even better for him.”

On if Crean remembers a year with so many injuries in Big Ten and if it has affected results:

“Well, I’d have to really think about that. I think my first year of 2008-09 there were a few injuries to key guys, but not to the longevity of this. But I’d have to think back through that. I think it affects it. I think without a doubt it does because everybody is changing. I mean, look at Wisconsin who is fantastic but they lose a key guy in the game and they don’t play with Frank Kaminsky and they lose early in the season on the road. So I think it’s true — any time key players are coming out there’s an adjustment period. And when the games are coming fast and furious like this, you’ve really got to have a group of upperclassmen that can carry the load when some of those key guys are out. And in this league, usually it’s an older league and usually there’s enough older guys that you can maintain it. But any time you’re taking a key, key guy out, everybody else has got to step up in their role. And they may not be ready for that. Some are, some aren’t. And I think that becomes a big determining factor in games when games are so close. And the margin for error in this league is so slim because of the closeness of teams right now. So I don’t think there’s any question it plays into it.”

On their success against Minnesota:

“Just speed. And not just the speed of the game, but the speed of moving without the ball, the speed of the ball moving, attacking the press and having really good recognition for the most part — a few times we didn’t. But sometimes our turnovers were errors of commission rather than omission, and that’s going to happen when you’re trying to be on the attack. We understand that and we’ve got to clean some of those things up. But I think the key to the game was that we did a good job of limiting Minnesota to one shot, and that was really key. And then at the other end we were able to get some offensive boards and turn them into baskets. But when you have a team that’s got size, depth and experience — especially with the starters — that Minnesota has, they’re going to find ways to beat you. And one of those ways is to get second shots. And we did a really good job of not letting that happen.”

On omission of Yogi Ferrell from major award lists:

“Well I didn’t know that until Rick Bozich actually told me that last night, and I really didn’t. I paid so little attention to those types of things. I think you’d have to ask the people that make those decisions, and I’m not even sure who they are. I’m not sure who does the voting on that but I don’t think there’s any doubt you have to question that. Because we’re on national television every night, he’s had a fantastic two years going into this year, and he’s done nothing but get better this year. So I don’t spend obviously a lot of time on those things, or I’d even know more about it. I don’t think Yogi does. I don’t think you can work as hard as Yogi does and spend as much time in the gym and lead film sessions and be in the film room and spend a lot of time worrying about the outside stuff. I think Yogi has got a very big picture in his mind and a short-term focus, if that makes sense, in the sense of he’s not wasting days and he’s not wasting segments of days. A great example is Friday night we practice until about 6:10, 6:20, something like that. Two hours later, he’s back in the gym. And that’s common, that’s not an uncommon thing for him. And I think truly — there’s no question you’d have to question the people that make the decisions. Yogi’s not trying and our team is not trying to win a popularity contest. Those things should be done on performance, and I’m not sure how those decisions get made, but Yogi’s performing. And he’s performing at a high level and he’s performing at a very consistent level and only getting better. So I think that will remain, but I don’t really have better answer other than that as to why that would happen.”

On importance of home crowd against Purdue: