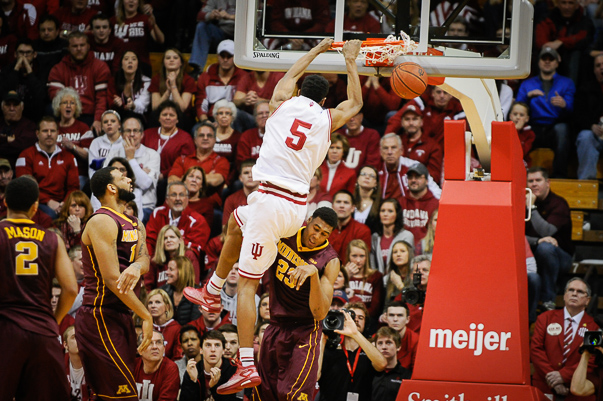 The Inside the Hall Big Ten Power Rankings are back for another week, as Wisconsin maintains its three-game lead on the Big Ten field while just one game separates second place from sixth in the league standings.

Here’s a look at where each team stands following the seventh week of play in 2015:

14. Rutgers (10-16, 2-11, PPP: .89, PPP Allowed: 1.04) (Last week: 13) … It seems like ages ago that the Scarlet Knights managed to beat Wisconsin in Piscataway — but it really was just over a month ago. That’s because since that game, Rutgers has gone 0-9, most recently suffering a 10-point loss to Purdue at home on Thursday in a game in which they only scored 51 points. But in that game, their .82 points per possession rate was nowhere near its worst in league play — the Scarlet Knights have had three worse offensive outputs in Big Ten games this season. (Next up: Feb. 19 at Iowa; Feb. 22 vs. Indiana)

13. Northwestern (11-14, 2-10, PPP: 1.00, PPP Allowed: 1.13) (Last week: 14) … Well, the losing streak is finally over. It took more than a month and a half between wins, but on Sunday the Wildcats pulled out a 66-61 overtime win against Iowa in Evanston. And that didn’t come without drama, either — as the Wildcats came back late only to be forced into overtime by a Jared Uthoff 3-pointer with three seconds remaining. But in the extra period, a key Sanjay Lumpkin steal and Scottie Lindsey block with less than a minute to go allowed the Wildcats to seal the win — their first after 10 straight losses. (Next up: Feb. 18 at Minnesota; Feb. 21 vs. Penn State)

12. Penn State (15-11, 3-10, PPP: .98, PPP Allowed: 1.01) (Last week: 12) … The Nittany Lions were quickly sent down to earth on Wednesday following their three-wins-in-five-games spurt with a 20-point loss at Ohio State. And against Maryland on Saturday in State College, the Nittany Lions trailed by as many as 13 points in the second half. But a 13-0 run from the 10:43 to 7:52 mark put them back within striking range, only for the Terrapins to close them out in the Bryce Jordan Center. It hasn’t come easy in Pat Chambers’ fourth season at Penn State, and for the fourth straight year under his reign the Nittany Lions will finish with a league record below .500. (Next up: Feb. 18 vs. Wisconsin; Feb. 21 at Northwestern)

11. Nebraska (13-12, 5-8, PPP: .93, PPP Allowed: 1.00) (Last week: 11) … As far as Big Ten teams that have taken a step back this year are concerned, the Cornhuskers are right at the top of the list. They didn’t lose much personnel over the offseason, but here they are — coming off losses to Wisconsin and Purdue this past week and five losses in their past six. All season long their offense has been an issue, from field goal percentage to turnovers to poor offensive rebounding. And as the season nears its close, those same issues that have plagued the Cornhuskers all season have yet to be resolved — as evidenced in their 35.5 percent field goal percent against Wisconsin and their 40 percent field goal rate and lowly 23.5 percent offensive rebounding rate against Purdue. (Next up: Feb. 19 at Maryland; Feb. 22 vs. Iowa)

10. Michigan (13-12, 6-7, PPP: .99, PPP Allowed: 1.04) (Last week: 9) … The biggest loss the Wolverines had in the injuries to Derrick Walton Jr. and Caris LeVert was their offense. And still, they have yet to recover from them. On Thursday at Illinois, defense got them to overtime at a 50-50 draw, but from there — much like in their overtime loss at Michigan State — the Wolverines did not show much else. The Fighting Illini would go on a 14-0 run in overtime before Muhammad-Ali Abdur-Rahkman hit two free throws in the closing seconds to give Michigan its only overtime points. They just simply lack enough weapons this season. (Next up: Feb. 17 vs. Michigan State; Feb. 22 vs. Ohio State)

9. Minnesota (16-10, 5-8, PPP: 1.02, PPP Allowed: 1.02) (Last week: 10) … The Golden Gophers’ three-game winning streak reached its peak on Thursday night in Iowa City, as a 12-2 run put them ahead, 55-44, at Iowa with 2:48 to go. The Hawkeyes would make it close, but they never were able to take the lead from Minnesota again. The league’s best defense at forcing turnovers had won four of their past five heading into Sunday’s game at Indiana — but their run was halted by the Hoosiers in Assembly Hall. Unable to match the Hoosiers’ shooters, the Golden Gophers simply were burned time and time again in a 90-71 loss. Luckily, for Minnesota, not many teams in the Big Ten cause as many match-up problems as the Hoosiers do. (Next up: Feb. 18 vs. Northwestern; Feb. 21 at Wisconsin)

8. Illinois (17-9, 7-6, PPP: 1.00, PPP Allowed: 1.02) (Last week: 8) … The Fighting Illini’s four-game winning streak came to an end on Sunday with a blowout 68-49 loss at Wisconsin — which isn’t all that surprising given the Badgers’ play of late. But even with Rayvonte Rice back in the lineup, the Illini struggled to find looks against Wisconsin — they shot just 40 percent from the field on only 44 shots, with the game’s 49 possessions being the fewest Illinois has played in at least 13 years. Much of that can also be attributed to the Badgers’ 15 offensive rebounds and only four turnovers as Wisconsin dominated possession. All in all, it was a performance Illinois fans won’t want to remember. (Next up: Feb. 22 vs. Michigan State)

7. Iowa (15-10, 6-6, PPP: 1.11, PPP Allowed: 1.12) (Last week: 3) … On Monday during his weekly Big Ten coaches teleconference appearance, Hawkeyes coach Fran McCaffery was asked about his team’s inconsistencies. He said they were part opponents outplaying the Hawkeyes. He also faulted his own team’s performances. Just a week earlier, the Hawkeyes beat Michigan soundly on the road and then easily handled Maryland at home. But this past week, they managed to let Minnesota escape from Iowa City with a win and then allowed a winless Northwestern team this calendar year to get its first victory of the year in Evanston. Just a week ago, it appeared the Hawkeyes had stabilized things and were en route to an NCAA tournament bid. Now, that goal seems more and more in limbo. (Next up: Feb. 19 vs. Rutgers; Feb. 22 at Nebraska)

6. Michigan State (17-8, 8-4, PPP: 1.07, PPP Allowed: .96) (Last week: 7) … On cue on Saturday, Valentine’s Day, the Spartans’ Denzel Valentine hit the game-winning 3-pointer against Ohio State in East Lansing. It gave Michigan State their second win in as many outings this past week following their 24-point blowout of Northwestern in Evanston. But in Saturday’s win, the Spartans showed grit — staying on course even after allowing the Buckeyes to come back from a nine-point halftime deficit — to pull out the win. (Next up: Feb. 17 at Michigan; Feb. 22 at Illinois)

5. Indiana (18-8, 8-5, PPP: 1.13, PPP Allowed: 1.13) (Last week: 6) … It was a night in which the Hoosiers had their second-worst offensive performance in more than a month (at 1.05 points per possession), but at Maryland on Wednesday, the Hoosiers found themselves with the ball and a chance to win in the final possession. Of course, neither of their two shots went in and the Hoosiers left College Park with a 68-66 loss. But on Sunday against a Minnesota team known for good defense, the Hoosiers scorched the Golden Gophers — “they flat-out kicked our butts,” Richard Pitino said. Indiana’s 1.37 points per possession, in fact, was the most Minnesota allowed in a game since a 90-61 loss to Ohio State on March 14, 2010. That just shows you Indiana’s firepower — at least when the offense is on. (Next up: Feb. 19 vs. Purdue; Feb. 22 at Rutgers)

4. Maryland (21-5, 9-4, PPP: 1.00, PPP Allowed: 1.01) (Last week: 5) … Neither of their two wins came easy this past week, but nonetheless the Terrapins found ways to win both against Indiana and at Penn State. Against the Hoosiers, the Terps could never find a knockout blow and against the Nittany Lions they allowed a second-half run to make things close. But in each game they stayed calm under pressure as they usually do — in fact, in games decided by single digits this season, the Terps are 11-1.  (Next up: Feb. 19 vs. Nebraska)

3. Purdue (17-9, 9-4, PPP: 1.04, PPP Allowed: .98) (Last week: 4) … The Boilermakers continue to do what they do best — that is, control the paint. On the road at Rutgers on Thursday, Purdue did not have its best offensive game but instead forced the Scarlet Knights into 14 turnovers and just 30 percent shooting on their 2s. At home against Nebraska on Sunday, meanwhile, the Boilermakers dominated the boards (44-29 advantage, 18-8 offensive rebound advantage) en route to an easy 66-54 win. The offense might not be there every night — but even when that is going wrong, the Boilermakers are strong enough in other areas to still win games. (Next up: Feb. 19 at Indiana)

2. Ohio State (19-7, 8-5, PPP: 1.10, PPP Allowed: .99) (Last week: 2) … They easily took care of Penn State in a 20-point win on Wednesday, but on the road at Michigan State, the Buckeyes faced a significant challenge against a strong Spartans side at home. Yet, even after falling behind by nine at halftime the Buckeyes battled back, even briefly taking a lead with five minutes to go. They would tie the game once more with 38 seconds to go on a Sam Thompson 3-pointer only for Valentine to hit the game-winner with four seconds remaining. But this was a game in which the Buckeyes had their second-worst scoring output all season and worst defensive output in five games. And yet, they still were in it up until the final possession. (Next up: Feb. 22 at Michigan)

1. Wisconsin (23-2, 11-1, PPP: 1.27, PPP Allowed: 1.03) (Last week: 1) … It comes as no surprise that the Badgers remain No. 1 in the power rankings, especially as they won their seventh and eighth straight games this past week. But perhaps even more impressive about the Badgers is that there has been no dip in performance level. Their Big Ten efficiency margin remains the highest since the 37-2 Illinois squad from 2004-2005, and the adjusted offensive efficiency remains the best KenPom.com has ever tracked. The Badgers have dominated plenty of games this season. And they continue to do so as it nears the home stretch.  (Next up: Feb. 18 at Penn State; Feb. 21 vs. Minnesota)