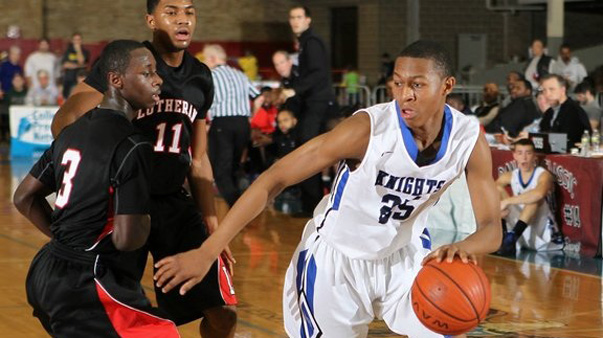 One of the top rising juniors in the country, Gill St. Bernard’s (N.J.) guard Tyus Battle, is getting his first taste of the highest level of Nike’s Elite Youth Basketball League (EYBL) circuit this spring and summer.

Battle, a 6-foot-5 guard who has taken two unofficial visits to Indiana already, is playing with New York-based Team Scan this year after previously playing for Pennsylvania-based Team Final.

The transition has allowed Battle to play multiple positions, which is something he hopes will help him when he arrives on a college campus in the fall of 2016.

“Team Final is a great organization. I love those guys a lot,” he said. “With Team Scan I get to play point guard more and playing with the big men down low prepares me for college a lot.”

In 16 EYBL games, Battle is averaging 8.8 points, 3.7 rebounds and 1.8 assists per game for Team Scan, which qualified for July’s Peach Jam.

Battle’s shooting percentages haven’t been great — 34.1 percent overall from the field and 29.4 percent from behind the 3-point line — but that hasn’t slowed down his recruitment at all.

He already has offers from Connecticut, Indiana, Ohio State, Syracuse, Virginia and Villanova, among others. Several other top programs like Duke, Kansas, Louisville and Michigan have also expressed heavy interest.

Battle, the No. 8 player in the class of 2016 according to the 247Composite, is scheduled to visit Michigan next month for their college practice camp and he’ll also go to Villanova on June 9.

Indiana, meanwhile, is in the midst of a transition on its coaching staff with the recent departure of Kenny Johnson, who was the main recruiter for Battle.

“He was the guy really recruiting me a lot,” Battle said over the weekend at EYBL session four in Eagan, Minnesota. “They’ve (still) been keeping in touch a lot. I love the campus. Went out to visit there. Coach (Tom) Crean is a really good guy.”

Last month, Battle’s father, Gary, told Inside the Hall’s Jordan Littman that the family is in no rush to make a decision despite all of the early offers and schools pushing for visits.

“It is still early in the process,” he said. “Tyus is just focused on getting better and being a 16-year old.”