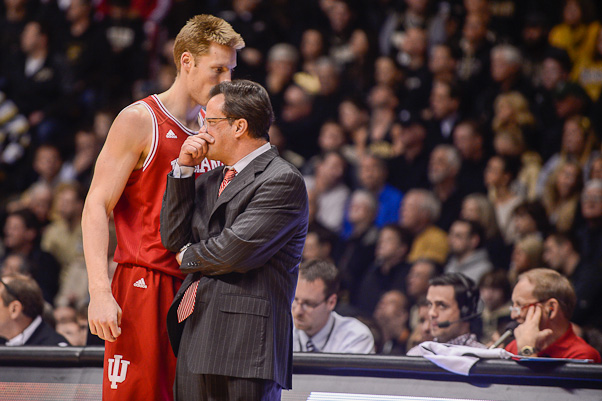 As it turns out, it can get worse.

The Penn State meltdown. The Hanner Mosquera-Perea middle-of-the night arrest. And now, on a Saturday in Mackey Arena, a pathetic performance against a Purdue team and student section smelling blood in the water. If timing is everything, this was about the worst time for the Hoosiers to take a trip to West Lafayette. But the schedule is what it is, and Indiana’s ship, for the moment, looks sunk.

The Hoosiers were their typical silly turnover self to start this one. But as the first half went along, Indiana started to match the intensity of the building. Purdue was heaving some bricks, and Indiana got back into the game — even taking a five-point lead at 27-22 with 6:30 to go. But with Noah Vonleh on the bench with three fouls, the lead slipped away and the rout was on. Indiana could have taken a lead into halftime on a Yogi Ferrell 3-pointer with eight seconds to go. But he missed with Indiana trailing 35-33. Devin Davis fouled Basil Smotherman on the rebound. In the double bonus, he’d make the first, miss the second, get his own rebound and drop in a lay-up at the buzzer to put Purdue up 38-33.

It was one of those afternoons for the Hoosiers.

Purdue dropped trey after trey (10-of-18, 55.6 percent) and hit some tough shots that resulted in and-1 opportunities. It finished the game scoring 1.15 points per possession, its highest mark for the conference season. The Boilermakers were feeling it today and couldn’t be stopped. Indiana’s offense, on the other hand, slipped into a vast void of nothingness.

Its field goal drought was almost unfathomable. From Jeff Howard’s lay-in with 2:33 to go in the first half until a Yogi Ferrell 3-pointer at the 13:08 mark in the second half, the Hoosiers didn’t make a shot. That’s 9:25 of game clock coming up blank along with twelve missed shots in a row. Indiana failed to convert on a number of lay-ups. A tie ballgame at 33-all suddenly became a 15-point deficit (53-38) and it appeared as if the Hoosiers had thrown in the towel.

As the shots weren’t falling, and Purdue was humming on the other end, things got stale on offense. Indiana stood around like trees; there was little movement or purpose and you wondered what the heck was going on. The Hoosiers took far too many shots from distance (8-of-23, 34.8 percent) simply because they’d have nothing much going and they’d just heave from the perimeter late in the shot clock. The Paint Crew chanted “IU sucks” and “Ball State’s better,” and well, those taunts rang true on a day like today.

There is no plug to pull here, no reset button on the machine to start this season over and try and play it out any differently. Indiana’s program just had its roughest week in some time — maybe the worst of the Crean era, depending on criteria? — and who knows where it goes from here.

The bleeding can stop with a win Tuesday, but is the wound already too deep?