The Minute After: Evansville 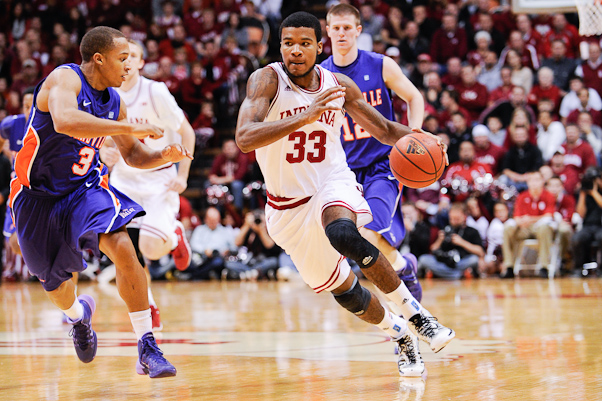 Thoughts on a 77-46 win against the Purple Aces:

I. Jeff Howard? Jeff Howard. Some of the media at Assembly Hall this evening tweeted shortly before the contest that it must be some sort of typo to the starting lineup. But Howard not only started, he played a career-high in minutes (15). Howard also become a trending topic on Twitter tonight in the United States. (Big night for Jeff Howard.) The speculation surrounding the change to the starting lineup is Tom Crean wanting to send a message to his young squad that effort and hard work will be rewarded. Or maybe the fact that he started in place of Jeremy Hollowell meant this was more a message to his sophomore who has struggled at times the last few games. (Crean is sure to address his decision to start the senior walk-on in his post-game comments.) If that was the case, Hollowell responded. The sophomore scored 18 points (a career high) in 17 minutes to lead all Hoosier scorers and had just one turnover.

Whatever the reason, this wasn’t the only thing different in Crean’s rotation tonight. His first subs of the game was a four for four swap: Noah Vonleh, Howard, Troy Williams, Will Sheehey out, Hollowell, Evan Gordon, Hanner-Mosquera Perea, Devin Davis in.

II. Evansville came into this game with a high-powered offense (90.6 points per game, nation’s 22nd most efficient offense, nation’s top 3-point shooting team, fourth-best eFG% in the nation), but the Purple Aces simply hadn’t faced any team as good or as talented as the Hoosiers. It showed right away. Evansville didn’t get into double digits in the scoring department until just over five minutes to go in the half and scored only 19 over the first 20 minutes. The Hoosiers’ length and athleticism was tough for them to deal with at the rim.

Much of this carried over into the second half. Evansville entered the contest shooting 54.8 percent from distance; it finished the game just 2-of-14 (14.3 percent). It shot under 30 percent from the floor and had a rough go of it at the line as well (11-20, 55.0 percent). The Purple Aces scored just .65 points per possession. D.J. Balentine had been averaging nearly 30 points a contest. He finished the night with 14 points (5-of-17).

The Hoosiers also rebounded the ball at a high level on the court, limiting second-chance opportunities when the shots weren’t falling for the Purple Aces.

III. While Vonleh did pick up two fouls in the first half, he returned to form tonight, notching yet another double-double (13 points, 12 rebounds). Vonleh also hit his first 3-pointer on the season, a straight-away shot from the top of the key. Will Sheehey  had a nice all-around game for the Hoosiers this evening (six points, five rebounds, three assists, two blocks and a steal). He also sacrificed his body diving for a ball in the second half, but was dubiously called for a foul on the play.

IV. The Hoosiers get a week to prepare for their next bout, an ACC-Big Ten Challenge matchup against Syracuse. KenPom gives the Hoosiers just a 26 percent chance at victory and Vegas is sure to favor the Orange. It’ll also be the first true road test for this squad. A win may be tough to come by, but it should give the youngsters some tough road environment experience before the Big Ten season hits.