Q & A: Max Hoetzel discusses his commitment to Indiana 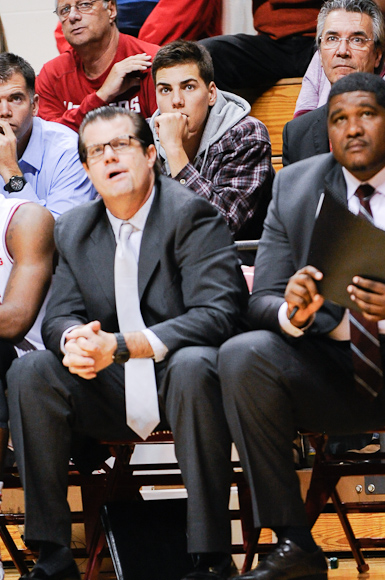 Sunday afternoon, Indiana received its second commitment of the 2014 recruiting class from Wilbraham and Monson (Mass.) forward Max Hoetzel during his official visit to Bloomington.

Later Sunday evening, Inside the Hall spoke to the Hoosiers’ newest commit on what led to his decision to choose Indiana:

On what led him to choose IU:

“Coach (Tom) Crean, what he said to me, he really believes in me and thinks I can have an instant impact as a shooter. He really thinks I can shoot the ball and not just shoot the ball, but you know, play basketball and he thinks that I have high-level basketball IQ. And you know, I can do a lot of things that I don’t really get credited for. And honestly, just taking that first shot in Assembly Hall was a magical feeling. And it was really something I couldn’t say no to.”

On what Crean told him when he offered a scholarship on Tuesday:

On what it meant for his parents to fly in from California for the official visit:

“Seeing them on those terms, it was everything I could’ve ever asked for. I hadn’t seen them in a couple of months, and it was great to see them especially in that context. They were really proud of me. It was a wonderful weekend.”

On when he realized he wanted to commit:

“It was when I was walking out on that floor at Assembly Hall. I had never seen brighter lights on a gym. It was crazy for a college arena. And the fact that the place was packed for an exhibition game was ridiculous. It was crazy. And just how people care so much about the basketball program, it’s really something else. It was something I couldn’t really describe. To be a part of that would just be amazing.”

On the effect of transferring to Wilbraham and Monson from Calabasas (Calif.) HS:

“I knew I had the potential to do whatever I wanted to as a basketball player, but some things are out of your control. Honestly, to leave Calabasas to go to prep school, it’s evident that it was one of the best decisions I’ve ever made in my life. I love everybody from Calabasas and Calabasas raised me, but I think that just having all the pieces fit into the puzzle was definitely made by coming out here to prep school and being around the right people and being around more exposure.”

On if he feels he can fit in with the team:

“Yeah, definitely. I was hanging out with the team Saturday night and they’re really cool guys. Noah [Vonleh] and Troy [Williams], they’re all just great people.”

On how he gave his commitment to Indiana:

“We were all meeting and then coach Crean asked me, “How do you like it?” I told him that there’s no other place that I’d rather spend my four years at than Indiana. Stepping out onto Assembly Hall, I knew it right away. He was ecstatic and everybody was excited, too. It happened today, right after the Haunted Hall of Hoops.”