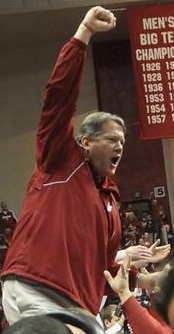 Indiana Athletics Director Fred Glass and basketball coach Tom Crean have been working for some time to find a marquee non-conference opponent to replace Kentucky.

Many schools have been mentioned in recent months — including Kansas, Louisville and Gonzaga — but no home-and-home agreement has come to fruition.

Glass told Inside the Hall on Tuesday that a marquee non-conference home game is unlikely for this coming season.

“We’re getting to the point where I think it’s going to be really challenging for us to get that for this year,” Glass said. “That’s been what we’ve been working on with Tom. We always try to have at least one marquee non-conference opponent. In the past, that was Kentucky, and then in off- Kentucky years, it was our ACC Challenge opponent.

“The Kentucky thing, that sort of threw a curve in it. We’re in between some potential new opportunities. We’re out there. I’m optimistic we’ll have some exciting non-conference teams, but it may be that the Kentucky situation forces us to lose a year.”

As it stands now, the Hoosiers will play non-conference home games against Evansville, North Florida, Oakland University and Kennesaw State.