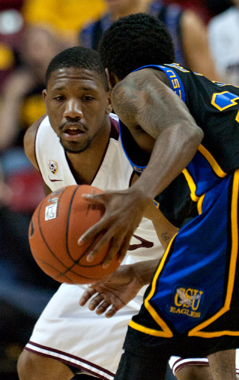 Evan Gordon, who announced he would transfer from Arizona State on Wednesday night, is meeting with Indiana coach Tom Crean and taking a visit to Indiana today, he told reporters Friday night.

Gordon, the younger brother of former Indiana standout and current Hornets guard Eric Gordon, has also been in touch with Butler and may take a visit to the Butler campus on Tuesday.

“Coming to Indiana, my brother has been down here and Butler is just two minutes away from my house,” Gordon told Kyle Neddenriep of The Indianapolis Star. “I’m definitely looking for the style of play and who they have and where I fit in with the team. I’m definitely looking at the coaching staff. There is a couple dynamics that I’m looking at.”

Gordon is eligible to step in and play immediately because he graduated from Arizona State this week. The 6-foot-3 guard averaged 10.1 points per game for the Sun Devils last season after transferring from Liberty, where he averaged 14.4 points per game his sophomore season.

Initially, it appeared Indiana was the ideal fit and the favorite to land Gordon. The Hoosiers have an open scholarship for next season, and Gordon has only one year of eligibility remaining. Reports surfaced on Wednesday night that Gordon planned to transfer to Indiana.

Butler has joined the party late, however, and seems to be making a push for Gordon.

The Bulldogs may be a good fit for Gordon as well because of Butler’s proximity to Gordon’s home and the team’s need at the guard position. While Gordon has primarily played the two-guard position in college, he is capable of bringing the ball up the floor and the Bulldogs lost starting point guard Rotnei Clarke to graduation.

“I think Butler is also another good place to play,” Gordon told Neddenriep.

Initial reports suggested Gordon wanted to make a decision quickly, and those appear to be accurate. He told reporters Friday night that he’d like decide on a school next week, but may wait until the week after.

“Next week, more than likely,” Gordon told Neddenriep. “Any staff wants to know what they’re going to be working with for the next year, so if I come to Indiana or were to go to Butler, I think they’d want a decision pretty soon so they know if they need to go find a guard.”

The way he phrased that last comment, it certainly sounds like it will be either Indiana or Butler, though Purdue has also expressed interest. We’ll have more updates on this developing story.