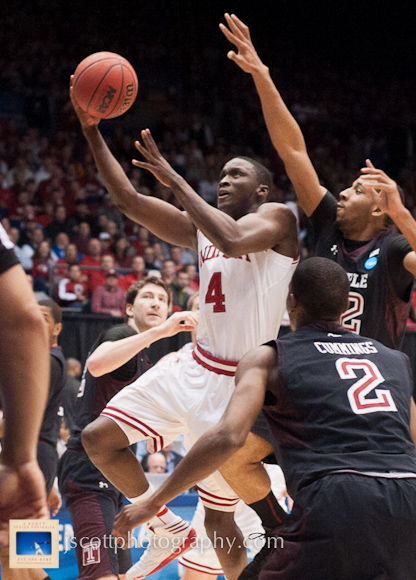 DAYTON, Ohio — For the second straight season, Indiana is headed back to the Sweet 16. The Hoosiers, who trailed Temple for most of the second half, scored the game’s final 10 points in a 58-52 victory and now march on to Washington D.C. to face Syracuse.

Here’s a look at five takeaways from IU’s win over Temple:

· The block is bigger than the shot: It won’t be replayed on ESPN for months like the buzzer-beater that knocked off Kentucky, but Christian Watford’s block of Anthony Lee with 2:20 remaining was a game-saver. Had Lee completed that play, Indiana would have been staring down a two-possession deficit against a team that wasn’t giving up any ground to the nation’s most efficient offense. Watford, who has been criticized at times throughout his career for his inconsistencies, made a play on the ball that he wouldn’t have made a couple of years ago. Afterwards in the locker room, many of his teammates joked that it was the highest they’d ever seen him jump. “Christian’s defense showed a toughness that he has,” IU coach Tom Crean said. “It was great that the country got a chance to see that because they’re a really, really good team.”

· A fitting dagger for Oladipo: The improvement of Victor Oladipo’s perimeter game is a big part of his transformation from a solid complimentary player to an All-American. So it was only fitting that Oladipo, who was just a 21 percent 3-point shooter a season ago, knocked down a straight away 3-point dagger with 15 seconds to go to punch IU’s ticket to the Sweet 16. Oladipo admitted in his postgame comments that his struggles often come when he thinks before letting go of the ball. When he caught the ball on Sunday evening, there was no hesitation and no doubt that the ball was going in when it left his hands. “I was just open and I shot it,” he said. “It really didn’t have anything to do with the moment or the confidence to shoot it. I didn’t think about it.”

· Gritty performance from Hulls: After a collision typically reserved for the gridiron, Jordan Hulls winced and held his right shoulder as if something just wasn’t quite right. He stayed in the game for a couple of plays, but later left the bench for the locker room and his return seemed uncertain. But as the Hoosiers took the floor for the second half, it was clear that the Bloomington native, who had extra support under his jersey,would not sit out with his team on the brink of a third round loss. He wasn’t anywhere close to 100 percent, but Hulls hit two key shots, a 3-pointer with 8:52 remaining and a pull-up to draw IU within two at the 2:56 mark, that epitomize what being a leader is all about in winning time. “You’d have to do a lot more to me than that to keep me off the floor in this kind of situation,” Hulls said. “My teammates had confidence in me, and I was able to knock down some shots in the second half.”

· Indiana got stops when it needed to: Crean has talked frequently about the importance of stringing together stops in order for IU to accomplish its ultimate goal. On Sunday, the Hoosiers held Temple scoreless over the game’s final 3:09. Over its final five possessions, Temple had a shot blocked and missed five shots. Last season, Indiana was thwarted in the Sweet 16 because of its defense. This season, the Hoosiers marched on to the Sweet 16 because of defense. “That’s what we’ve been doing all year,” Cody Zeller said. “We’ve been in a lot of close games throughout the Big Ten especially. We’ve got a mature group that, even though it wasn’t going as well, we wouldn’t get things going for a while, but that’s what winners do.”

· Wyatt lights up Indiana, then goes cold: For 33 minutes and 29 seconds, Indiana had no answer for Temple guard Khalif Wyatt. The Atlantic 10 player of the year scored in every way possible: drives to the basket, pull-ups in the lane, from the foul line and from the perimeter. Wyatt was playing as if he wanted to be the guy in One Shining Moment who was responsible for knocking off Indiana. But over the game’s final 6:31, Wyatt went virtually silent. Despite finishing with a game-high 31 points, the Temple senior couldn’t get clean looks down the stretch and later credited IU’s defense as a big reason for his quiet finish. “Oladipo is a really good defender. And that kid [Remy] Abell is a really good defender,” Wyatt said. “It was just really hard for me to get the ball.”