The Minute After: Temple 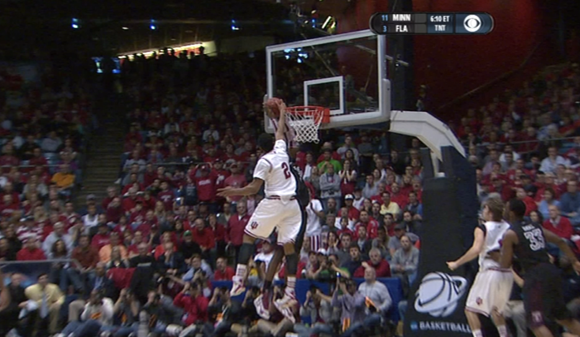 They did it. Finally.

The Hoosiers, in a grind-it-out game reminiscent of losses this season, got over the hump in a low-scoring affair and willed themselves to victory in crunch time.

It was tough and far from beautiful. But they survive, and D.C. and the Sweet Sixteen are calling.

Much was made of the Khalif Wyatt-Victor Oladipo matchup. Wyatt owned the first half, scoring 20 points in 20 minutes on 8-of-14 shooting. Crean tried others beyond Oladipo like Remy Abell and Will Sheehey, but Wyatt kept old-manning IU, kept hitting while his teammates only mustered nine of the team’s first half points. IU trailed 29-26 at the break, as Jordan Hulls iced his shoulder in the locker room and Cody Zeller sat with two fouls.

Temple, a team that played five-straight one point games during the season, was physical and grabbed this game by the throat. It got second-chance opportunities with offensive rebounding. It slowed the Hoosiers into a halfcourt game. This is the formula to beat Indiana, and the Owls were sitting pretty. Had they hit more shots in the first half (heck, had they hit more shots period with just a 33.9 percent mark from the field for the game and a terrible 3-of-24 performance from distance), and Indiana might be heading back to Bloomington with tail firmly between its legs.

But the Hoosiers played the second half exactly how they needed to in this type of game. Cody Zeller had a rough afternoon (six turnovers, 4-of-10 from the field), but Indiana went to him time and time again early in the second half and he kept drawing fouls, which set up an early bonus situation for IU. The fruits of that labor were capitalized on at the end of the contest, as Indiana got two double bonus trips to the line in the closing minute of the game, where Oladipo hit 1-of-2 and Watford hit 2-of-2. The Hoosiers finished the game 16-of-20 from the line.

And because Temple couldn’t buy a bucket — and because Wyatt went cold for a stretch amidst all his barking and jawing and cursing — Indiana never trailed by more than six and was always within striking distance.

“The big thing for us was that Temple never got any separation,” Crean would say after the game.

And so a late strike would be made.

Down four (52-48) after two Wyatt free throws, Hulls, painful shoulder and all, made a move and hit a jumper at the free throw line.

Hulls told teammates after the game that his “legs would have had to be cut off” for him not to play, and a literal interpretation of such a quote isn’t out of the question.

On the ensuing possession, Indiana’s defense would come up huge. Zeller and Oladipo blitzed a ball screen for Wyatt in the corner. He would heave the ball up at the rim and Anthony Lee was there at the rim to catch the ball. It looked as if it could be another late-in-the-shot-clock score for the Owls — something they did in the second half on a few occasions, a Wisconsin-esque performance. But Christian Watford would help weak side and come up with an enormous block. Lee would get a second-chance off the block and miss. Watford grabbed the board.

A reporter asked Watford after the game if this block was bigger than the #WatShot, and based on the stakes, he would say that it was.

Zeller would get to the line for the Hoosiers on the next possession and hit both attempts. Tie ballgame. And now it was time for the Wyatt and Oladipo show. Oladipo gambled and went for a steal out past the left wing. Wyatt would heave a 3-pointer off of it and miss. The DeMatha product grabbed the long board and drove up in transition, only to be fouled in the process by Wyatt. He would hit 1-of-2 at the line to give the Hoosiers a one-point advantage.

Another Indiana defensive stand began with Wyatt being denied the ball because of Oladipo’s faceguarding. Temple would call timeout with 10 seconds left to shoot and more faceguarding by Oladipo and a double-team from Yogi Ferrell again kept the ball away from Wyatt. The Owls could only muster a deep jumper from Rahlir Hollis-Jefferson that missed and went out of bounds. Oladipo’s huge 3-pointer and Watford’s aforementioned 2-of-2 trip from the line would seal it.

Indiana finished the game on a 10-0 run. After the game, an admittedly relieved Crean would tell this Temple team it was the toughest the Hoosiers had faced all year.

Maybe true, maybe not. But Indiana finally figured out how to win against a team that slowed them down and mucked them up, and it couldn’t have come at a better time.