Hanner Mosquera-Perea’s night against Florida Atlantic was somewhat brief (14 minutes), but productive (four points, 10 rebounds and two blocks). Yet, he’s still showing signs of rawness. The freshman also had three turnovers and looked out of sorts at times.

In any event, a look at both of his scoring plays and a block (as well as a supercut of his four points, 10 rebounds and two blocks) in the latest edition of Film Session.

Christian Watford starts the action on the left wing here and dribbles left. Mosquera-Perea see an opportunity to set a ball screen:

So he does as Watford now looks to use it and switches hands with the ball:

Mosquera-Perea is able to find space on the roll as Dragan Sekelja doesn’t commit to either a) hedging hard on Watford or b) keeping a body on  Mosquera-Perea:

He collects and scores on a dunk:

II. Will Sheehey brings the ball up in transition and Mosquera-Perea, who is sneaking behind the Owls’ defense calls for an alley-oop:

Sheehey stops and pops a mid-range jumper. (We have seen this before.) Mosquera-Perea sees this and has Florida Atlantic sealed off down low:

From there, it’s as simple as the freshman using his superior strength, length and athleticism to tip in Sheehey’s miss: 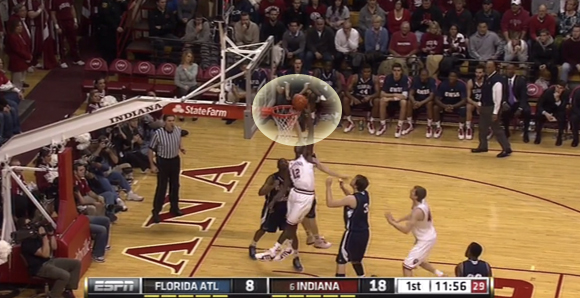 III. Greg Gnatt gets a step on Sheehey and begins to make a drive to the hoop. For now, Mosquera-Perea stays home down on the right block:

With Gnatt starting to gather, Mosquera-Perea makes a move and looks to get up and affect a potential shot:

He rises and cocks his arm back … :

Swatting the ball high into the air:

He grabs the ball and immediately finds Remy Abell with an outlet pass:

Abell dribbles the length of the court, but ends up missing the dunk here and it bounces out of bounds. Still, a good example of Mosquera-Perea’s block turning defense into (almost) quick offense: