Crean: Abell not ‘scratching surface of how good he can be’ 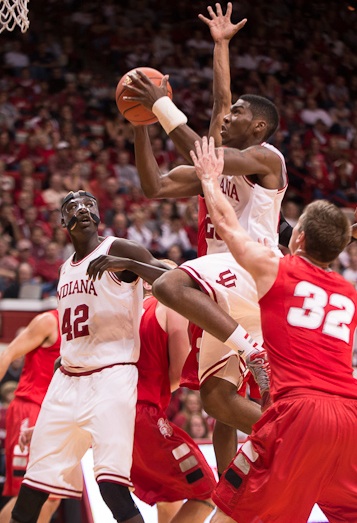 Depth has been cited as one of the many reasons Indiana is the preseason pick to win the national championship.

But Tom Crean has been careful in the preseason to not prematurely anoint his team as deep until he can substitute without experiencing much of a drop off in production and consistency.

A big piece to establishing that consistency from the bench is sophomore guard Remy Abell.

As a freshman, Abell played sparingly for much of the season. But he filled in and played key minutes down the stretch with Verdell Jones out in a win at Purdue. He also did so in the second round of the Big Ten Tournament and three NCAA Tournament games. Those experiences should pay off for Abell, who is expected to take on a bigger role in his second season in Bloomington.

“It was big getting more playing time, especially on a big stage like the NCAA Tournament,” Abell said earlier this fall. “That stage was huge and coming into an even bigger stage, it’s definitely going to help.”

Like he did a season ago, Crean is hopeful that he has a solid core of players that can be interchangeable as starters and, right now, Abell appears to be squarely in that mix.

This preseason has been a productive one for Abell as he’s been one of the most consistent perimeter players for the Hoosiers through the first two public scrimmages and the exhibition game. In the win over Indiana Wesleyan, he stuffed the stat sheet with seven points, three rebounds, three assists and a steal in 13 minutes.

“He got better throughout the game. He was not as aggressive as he needed to be,” Crean said. “He’s playing in a box, which is one of my terms for when you’re very narrow and you’re not spreading out and bringing that spacing to the game and creating havoc for your man. He got better at that.”

Getting to the basket was one of Abell’s strengths throughout high school and as a freshman, but working on his perimeter game was an offseason necessity to grow more confident offensively. Thus far, he’s appeared more confident in taking the perimeter shot and knocking it down, even with a man in his face.

“I wanted to work on my jump shot, hit it more consistently,” he said at the media challenge last month. “I know I can get to the rim, but if I know I can hit that, it can open up things for my teammates. I feel like I’m much improved with my game and with my strength.”

To his credit, the Louisville Eastern product, who originally signed a National Letter of Intent with Bradley before re-opening his recruiting following a coaching change, isn’t getting ahead of himself about an increased role or the prospect of more playing time.

His approach and tone hasn’t changed from last season, when he was hungry to earn more time and contribute in any way possible.

“I’m just trying to do whatever I can to help the team,” Abell said on Thursday. “When my name is called, come in and do what I’m supposed to do. Everybody’s got a role on this team and I’m just trying to play mine to perfection.”

It’s that attitude that has the coaching staff excited about his potential, which is still largely untapped, according to Crean.

“We’ve gotta get Remy to go from flashes to consistency. He’s one of the most well-loved guys in that locker room. He’s a great kid, great personality, incredibly hard-working student. And I don’t think he’s scratching the surface of how good he can be when he’s out on the court. And that’s what we need from him.”