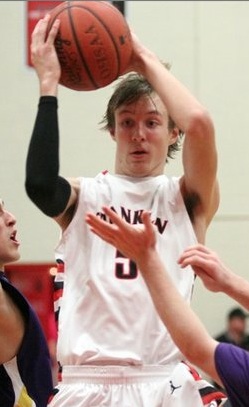 2015 Franklin (OH) guard Luke Kennard was on campus Tuesday for an unofficial visit and his father, Mark, was impressed following the family’s first trip to Bloomington.

On Thursday night, Inside the Hall caught up with the 6-foot-5 lefty for his thoughts on IU’s facilities, the coaching staff and much more:

On the visit to Indiana and what he was able to see while in Bloomington:

“The coaching staff was great. I loved each and every one of them. They proved to me that they can make me the player that I want to become. The academics were great. I like all of the facilities. They really impressed me with everything. They took us on a tour of campus and it wasn’t too big and it wasn’t too small. I feel like it’s a nice distance from home so my parents could watch me. It was a really nice visit. I really liked it.”

On Cook Hall and Assembly Hall:

“They were great. Cook Hall looked brand new. Assembly Hall was great. It was big and I can see myself playing there sometime. You can tell all of the tradition that’s been there.”

On watching an IU workout and getting a chance to play in open gym:

“The workouts, they go very hard. Coach (Tom) Crean, he makes them go hard, which I really like. If they make a mistake, he’ll get on them and they’ll listen to him because they know that he can make them better by doing that. So they listen. Getting up and down with them, I had so much fun. They’re very big and strong. It was a fast pace, but I kept up with them and it was fun playing with them.”

On who impressed him in open gym:

“Victor (Oladipo), he was quick and he was strong and he can jump really well. He controls the game when he wants to and he can make plays happen. That’s a guy that I would look up to get myself better and watch him to make me a better player.”

On the strengths of his game and what college coaches tell him they like about him:

“My shooting and I can play pretty well on defense. I can pass pretty well, I can create plays and I can get my teammates open. I’d say that’s about it.”

On how he’s handling the early recruiting attention including offers from Ohio State and Xavier:

“I’m just taking it all in. And I’m trying to stay as humble as I can. I feel like I have right now, but I’m just taking it in and I’m not rushing anything. I don’t think I’m taking in too much at a time. I’m just going slow with the process and getting to know every coach real well. I’m just trying to take it all slow.”