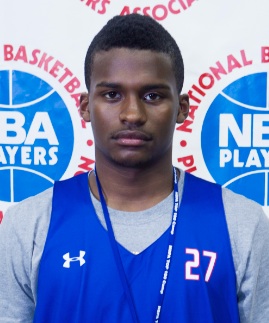 CHARLOTTESVILLE, Va. – Indiana commit Stanford Robinson (Fairfax, Va.) is taking part in this week’s NBAPA Top 100 Camp at the University of Virginia, an event he called “the best I’ve ever been to.”

The 2013 guard from Paul VI Catholic played well individually in the first game – six points and seven rebounds – but his team came up on the losing end. Robinson attacked the rim strong and played tough defense throughout.

Robinson told Inside the Hall he spoke with the entire IU coaching staff this week.

Tom Crean talked to him about adjusting to more a point guard role rather than shooting guard.

“We just talked about basketball and what I’m getting better on,” Robinson said. “I don’t think it’s that hard because I’ve been playing the one at my school now. I’ve just been working a lot off the pick-and-roll action. That’s what he specifically told me to work on.”

He won’t visit Bloomington until next season, when he’ll see the Hoosiers take on North Carolina in the ACC/Big Ten Challenge.

When asked about IU’s potential preseason No. 1 ranking, Robinson lit up.

“It just puts a target on my back when I’m out here performing,” he said. “I actually can’t wait.”