The Minute After: VCU 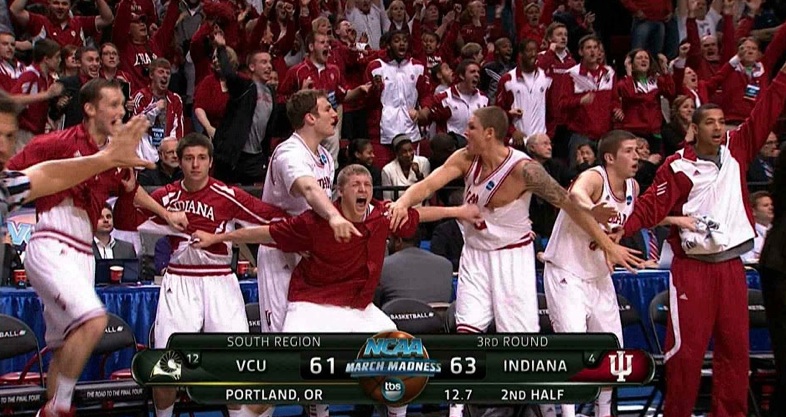 Caught your breath yet?

What a finish. What a win. What survival.

Things did not look good in the second half for the Hoosiers. VCU’s half-court trapping was eating them alive. The Rams’ bigs would hedge high off of ball screens and Jordan Hulls (five turnovers) couldn’t handle it. Indiana posted a season-high 22 turnovers (34.2 TO%) in this one, and it just about cost them — maybe should have cost them  — the game. The Hoosiers also had issues getting Cody Zeller involved in the offense after halftime, and he was part of the turnover problem tonight as well (four).

But here was the reality of the second half: VCU couldn’t make a bucket. So for all the turnovers the Rams forced on Indiana, all the possessions Indiana wasted, they weren’t able to punch the lead too far out there. Check this: In the last 12:20 of the game, VCU only made three baskets. After scoring a combined 83 points in the first half (42 for VCU, 41 for Indiana), the teams combined for only 41 in the second half (19 for VCU, 22 for Indiana).

But in the last five minutes of this one, Indiana was able to slow it down and get some semblance of an offense together. The Hoosiers went to Zeller. He got to the line twice and made three of four. He hit a jumper. And Victor Oladipo got aggressive. He slashed to the cup for a 3-point play to cut the lead to one after Bradford Burgess missed two free throws. And Oladipo remained aggressive on Indiana’s next possession, snagging a defensive rebound off a VCU missed three and going coast-to-coast. Though his shot was blocked, Will Sheehey found himself in the right place at the right time. The block came right to him on the right baseline. He splashed in a mid-range jumper. It put Indiana up two. It was all the Hoosiers needed.

A Troy Daniels’ 3-pointer missed just before the buzzer — a shot the Rams had built their lead on in this one, but finished just 9-of-30 for the game — and there would be no tip-in, no buzzer beater here.

63-61 Hoosiers. Onwards to the Sweet Sixteen, to Atlanta, to another showdown with the Wildcats.

+ Christian Watford came up big before half in this one, scoring the last eight points of the first frame for the Hoosiers. He played with fire during that stretch and showed a lot of emotion — which isn’t exactly characteristic of the Alabama native. It was big. VCU had punched the lead out to nine. But Watford’s inspired play insured the Hoosiers were only down one (42-41) at half.

+ Beyond Hulls’ issues with the ball this evening, he also had a poor shooting night after lighting up New Mexico State. Hulls finished just 2-of-7 (1-of-4 from 3-point range) and had only five points. Indiana is going to need everyone against the Wildcats in Atlanta next week, and Hulls will get some time to clear his head and put it behind him.