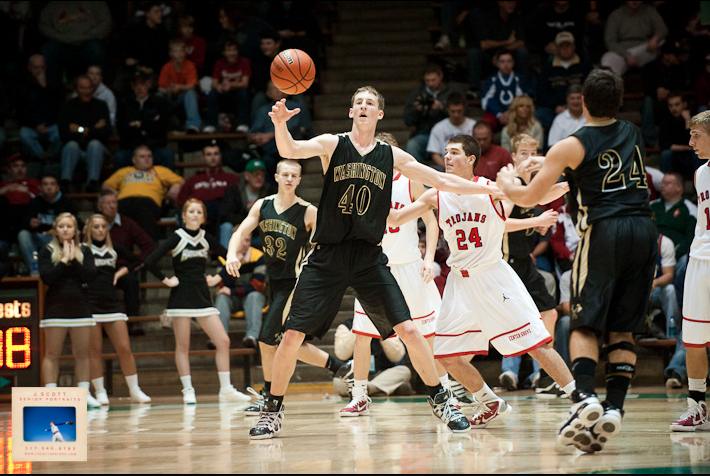 Washington’s Cody Zeller (40) catches a pass from Kurtis Anthony (24) in the City Securities Hall of Fame Classic on December 30 at New Castle. Washington fell to Center Grove, 68-64. Photo by Jamie Owens of J. Scott Photography. Click here to view a gallery from this game and other Indiana high school games.

+ Cody Zeller (Washington): Twenty-four points in a 84-57 conference win over Mt. Vernon (Posey) on Dec. 28. Led Washington with 24 points, 11 rebounds, two steals and an assist in a 68-64 loss to Center Grove in the City Securities Hall of Fame Classic on Dec. 30. Washington also fell to Warsaw, 46-44, in the consolation game of the Hall of Fame Classic. Zeller had 13 points and 15 rebounds. He was named to the all-tournament team. (Inside the Hall coverage links: Here and here.)

+ Hanner Perea (La Porte La Lumiere): Did not play as La Lumiere was off for holiday break.

+ Peter Jurkin (United Faith Christian Academy, NC): Seven points in a 68-48 win over the Arden Christ School on Dec. 29. UFCA won 65-54 at Walton on Dec. 28, but no individual numbers for Jurkin were available. UFCA also played at I.C. Norcom on Dec. 30, but no results were available.

+ Ron Patterson (Broad Ripple): Fourteen points, five rebounds and six blocks in a 72-56 win over Jeffersonville at Mackey Arena on December 29. On Dec. 30, scored 25 points in a 72-59 win over Southport and seven points in a 45-38 win over Chatard in the Broad Ripple Tournament. Patterson attended the Indiana-Ohio State game at Assembly Hall on Friday.

+ Collin Hartman (Indianapolis Cathedral): Did not play. Cathedral returns to action on Jan. 4 against Indianapolis Northwest.

+ Darryl Baker (Jeffersonville): Thirteen points and six rebounds in a 72-56 loss to Broad Ripple at Mackey Arena on Dec. 29.

+ James Blackmon Jr. (Ft. Wayne Luers): Twenty-seven points in a 90-68 win over Ft. Wayne Snider in the Summit Athletic Conference Holiday Tournament on Dec. 29. On the second day of the SAC Tournament, Leuers beat Wayne 73-72 in overtime on and lost to Northrop 78-74. Blackmon Jr. hit 10-of-10 free throws in the second half of the Northrop loss.

+ Trey Lyles (Indianapolis Tech): Did not play. Tech returns to action on Jan. 7 at Brebeuf Jesuit.

+ Jaquan Lyle (Evansville Bosse): Did not play. Bosse returns to action on Jan. 7 at Evansville Central.

+ P.J. Thompson (Brebeuf Jesuit): Brebeuf won 61-58 at Martinsville on Dec. 30, but no individual stats were available.