Around the Hall: Recruiting, anyone? 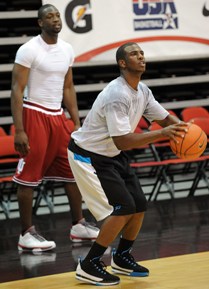 + A few days old, but if you haven’t read Dana O’Neil’s piece on the shadiness of the current recruiting landscape, it’s a must-read.

+ Our friend Jody Demling of The Louisville Courier-Journal has video interviews with Hanner Perea and Peter Jurkin. Demling also has recaps from Las Vegas: Day One and Day Two.

+ The Indianapolis Star’s Kyle Neddenriep writes on the sad passing of Broad Ripple senior-to-be and IUPUI recruit Steven Jamison after an eight-month battle with rectal cancer.

+ Kyle also has an update on Robert Goff, who is back on the Indiana recruiting radar.

+ Eamonn weighs-in on the return of Maurice Creek over at ESPN College Basketball Nation.

+ After a review of the officiating during the NCAA Tournament, John Adams wants to make sure fouls that are committed are being called, ESPN’s Andy Katz writes.