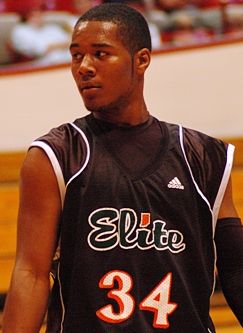 After speculation that he wouldn’t attend Friday’s Hoosier Hysteria, 2012 Indianapolis North Central guard D’Vauntes Smith-Rivera made it to Bloomington this weekend for the kickoff of the 2009-2010 season and Indiana’s 27-14 homecoming football win over Illinois.

Smith-Rivera averaged 15.4 ppg, 4.8 rpg and 3 apg as a freshman and is rated the No. 12 prospect nationally in his class by ESPN. Inside the Hall caught up with Smith-Rivera Sunday evening for a brief Q & A:

On his Hoosier Hysteria plans:

“I was going to go the whole time. Early in the week me and my parents were talking about going to camp down in Atlanta, but we just decided to come down to IU.”

On the atmosphere of this year’s Hoosier Hysteria versus last year’s:

“The atmopshere was great. Last year it was very intense and this year they came back with even more fire. They called out my school, so I was pretty happy to hear that.”

On his relationship with AAU teammates Hanner Perea and Peter Jurkin, who also attended:

On what he learned from Saturday’s open practice at Assembly Hall:

“Just how hard they work. You can really see that they want to get better and they want to become a better team. They’re all about winning games and whatever it takes to get the job done, that’s what they’re gonna do.”

On new schools that have recently expressed interest:

“Georgetown has been to my school to watch me play a few times. North Carolina has been to North Central to talk to my coach a couple of times. That’s pretty much the newest schools in my recruitment right now.”

“Right now I don’t have an exact list, but right now IU is still pretty high up there with the rest of the schools.“