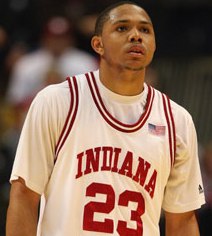 I’m sitting on my couch now — I tend to do that a lot in the evening — and I’m watching Eric Gordon for the first time this season, as his Clippers are taking on my Bulls. I had almost forgotten how he played, but his first drive to the bucket snapped my memory back to its right place: he’s so strong, so smooth, he just looks like he belongs on a basketball court. This is what he was born to do. I love his game.

So, it was sort of random happenstance that Jeff Rabjohns of the Indianapolis Star dropped this exclusive interview with Eric Gordon this evening. And, in agreement with that Sports Illustrated article from October, it looks like a lot of kids were doing drugs on the team.

“It was the guys that were doing drugs that were separate,” Gordon told The Indianapolis Star in an exclusive phone interview this week, speaking publicly for the first time about the issues that played a part in a once top 10 team failing to win a single postseason game.

Gordon didn’t disclose which players used drugs, but he said D.J. White and two others still on the team were among those who did not. Attempts to reach White and several other former players were not successful.

Gordon said Sampson “tried to stop it,” but the coach “was just so focused on basketball and winning and everything.”

Gordon said he spent considerable time with a family friend in Bloomington because the atmosphere around some players was so bad he didn’t feel comfortable on campus.

“Sometimes it felt like it wasn’t even a real basketball team because of all the turmoil that went on,” said Gordon, now a starting guard for the Los Angeles Clippers. “I was just thinking about that the other day. It was so crazy that all that stuff threw off a good season and made it a waste, basically.

“It was really tough for us to be around each other all the time off the court because we were so separate.”

At this point, there’s really no need to dig much deeper here: it is what it is. We knew some of these kids were troubled, and we were pretty certain DJ and Eric rose above it. (Oh, and Kyle Taber and Brett Finkelmeier too.)

Here’s my only comment: How much drugs were all the other guys really doing? I mean, the way Gordon makes it sound, it’s like when these kids weren’t on the court, they were high all the time. To the point where you wouldn’t even think to see them or hang out with them, because they were smoking, or snorting, or injecting or doing whatever.

Yeesh. Was it really that bad?

For what it’s worth: Looks like Cobra Brigade was maybe at least half right.