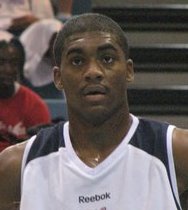 Today we take a break from the Top 10 countdown as Inside the Hall caught up with 2009 commitment Maurice Creek for a Q & A. Creek committed to Indiana in early May and will play at Hargrave Military Academy this winter.

On his relationship with Coach Crean and the decision to attend Indiana:

On when he plans to visit Bloomington:

“I haven’t been to Bloomington yet but hopefully I can get there in early September when I start my senior year.”

On the decision to attend Hargrave Military Academy for his senior season:

“I know a couple of players that are going there and it’s close to home. My parents can see a couple of my games. That’s the school that will put me in the best situation.”

On his play in Las Vegas at the Reebok Championships:

“It was fun. I think I played really, really well in Vegas. Unfortunately we didn’t win the whole thing but it happens. I didn’t play much in the spring and I just wanted to prove myself. I felt like I played well in Vegas.”

On the strengths of his game and what he can improve on:

“I’m an all-around player. I can play a little bit of the point, shooting guard and small forward. I look for other people. They (Indiana) just want a team player and that’s what they’re getting out of me. They’re getting a team player and a person that can lead the team. I can work on my athleticism a little bit more, but other than that, my defense is straight, rebounding is good, passing is good and shooting is always good.”

On his goals and mindset when he arrives in Bloomington:

“As a freshman, I’m trying to get a national championship. People think that with the situation that happened at Indiana that Indiana is going to fall down into its place, that its not going to be as good with the penalties that Coach Crean has because of the situation they had last year. But my mindset is to come in as a freshman, do what I do best and as a team, try to get to the national championship to show everybody that Indiana is alive and is always going to be alive for the rest of the time we live.”