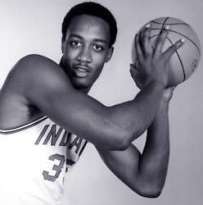 The ballots have been counted and it’s time for Inside the Hall’s countdown of the greatest Indiana players of all-time. Today: No. 8: George McGinnis.

The case for McGinnis: Although he only played one year in Bloomington, the numbers McGinnis posted in that season are remarkable. He is one of only five players in history to lead the Big Ten in scoring and rebounding in a season. His 45 points against Northern Illinois are the fourth highest in a game in school history.