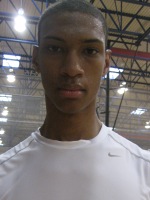 I just spoke with Lawrence North 2010 forward Dominique Ferguson and he confirmed that he committed to Kentucky about an hour ago. Ferguson is one of the top 10 players in the 2010 class and visited Indiana last fall several times when Kelvin Sampson was still running the show. This is a huge get for UK as Ferguson is one of the most versatile players in the 2010 class and should be a five-star prospect when Rivals and Scout release their rankings after the spring evaluation period.