A new sense of direction for Indiana basketball 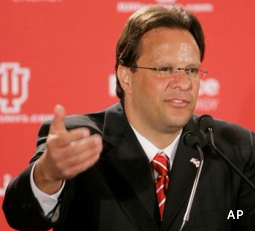 The last 48 hours have been nothing short of a whirlwind of emotions for fans of Indiana basketball.

Monday night, the feeling was that of doom and gloom as we learned interim head coach Dan Dakich had dismissed Jamarcus Ellis and Armon Bassett from the program and the coaching search appeared to be at a standstill.

Then yesterday, everything changed with early afternoon rumors that Indiana had its man, Marquette coach Tom Crean. When PostmanE, PostmanR and myself started to gameplan how we were going to cover the coaching search here on ITH, we decided to make a list of potential candidates and profile each of those guys. Ironically, the first name we profiled was Crean.

When I wrote my Crean profile, I felt like he was a great candidate, but I was not optimistic about our chances to pry him away from Marquette. Crean’s situation at Marquette was a very good one and he’d finally relieved himself of the knock that he couldn’t win in March without Dwyane Wade with an NCAA win over Kentucky just weeks ago. Why would he leave a comfortable situation for a program in turmoil?

Then, once Crean opened his presser today, I understood why, right from the man himself: It’s Indiana.

You see, this is a man that understands the tradition of basketball in this state. Just 30 minutes of listening to Crean speak gives you a great understanding of his opinion of the program and its place in the landscape of college basketball. As Crean said, there are certain jobs around the country that you don’t turn down. The position of head basketball coach at Indiana is one of them. The fan base and support is unparalleled. Basketball is the show in Indiana. And it always will be.

With that said, there’s a lot of work to be done to return IU to the glory it once enjoyed. Crean understands that and hopefully all of you do as well. The upcoming season is sure to have its challenges — mainly due to personnel or lack thereof — but you can be sure of one thing: the players you’ll see on the court will be proud to wear the Indiana uniform. It will be about Indiana, not the individual. I know many of you will probably ask my opinion about the possibility of Ellis and Bassett returning next season. Both players have a lot of work to do to earn their way back. It won’t be handed to them nor should it be. If they don’t wish to do the things necessary to return, good riddance.

A good sign of encouragement from the aftermath of today’s press conference were the quotes given by freshmen Jordan Crawford and Eli Holman to the media. Both seemed thrilled with Crean’s arrival and while they wouldn’t commit to returning, I would be surprised if you don’t see Crawford and Eli in the cream and crimson next fall. From all accounts, Matt Roth, Tom Pritchard and Derek Elston are all on board, which is nice to see.

So breathe a sigh of relief, Hoosier fans. We’ve got our man and the program is headed in the right direction. It was arguably the toughest season of basketball we’ve all had to endure and it’s nice to see a sunny day in what has been a dark couple of months.