The Morning After: Tom Crean 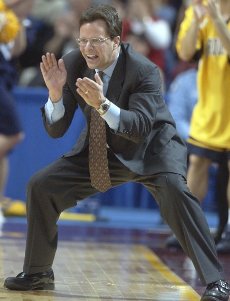 Or The Night Of: Tom Crean …

It’s over. The speculation, the rumors, the top five lists for coaching candidates — it’s over. Tom Crean is IU’s next coach. And really, I think it’s a great fit. I was infatuated with Tony Bennett like the rest of you out there; I was hoping for a big splash name too. But Crean falls somewhere in the middle of that. He’s young at 42. (Who else is relived we didn’t land Lon Kruger or Mike Montgomery? Phew.) He’s got Big Ten experience under Tom Izzo at Michigan State and recruits Chicago and Indiana. He doesn’t have to get set up for recruiting in the Midwest; he’s been doing it for years.

His coaching philosophy should fit the Indiana mold as well. His defense is tight-nosed in the half court (think of Dominic James giving some great on-ball pressure) and his offensive sets are varied and complex. (Hey, we might actually have plays and stuff!) This is not to say he’s going to succeed at every turn. That would be foolish. And it’s not to say he’s not without flaw. His NCAA tourney record might not jump out at you (5-5) and he’s only won one game in the Big Dance since Dwyane Wade left the program in 2003. He’s been to the NIT quite a bit too. But hey, he can’t come up all roses.

So first thing is first: the press conference later this morning. Crean will hopefully etch out why he made the move and what he plans to do. Then his next mission is to get a hold of Jamarcus Ellis, Armon Bassett, Terrell Holloway and Devin Ebanks. From how Ellis talked to the IDS tonight and touted how much of a recruiter Crean is, I’m hopeful we can score three of those guys back. Ebanks is probably a lost cause. From there, onwards to win over the university, boosters, fans, the state of Indiana. Think Kelvin Sampson’s barnstorming tour from a few years back.

Speaking of Kelvin Sampson, we have a guy in Crean that’s run a clean program up to this point. As far as we know, he has no problems using the telephone. After the NCAA rules in June, we hopefully will no longer be on pins and needles wondering what current setback is going to befall our Hoosiers.

So rejoice. Sit back. Relax. It only gets better from here.