The Morning After: That’s that 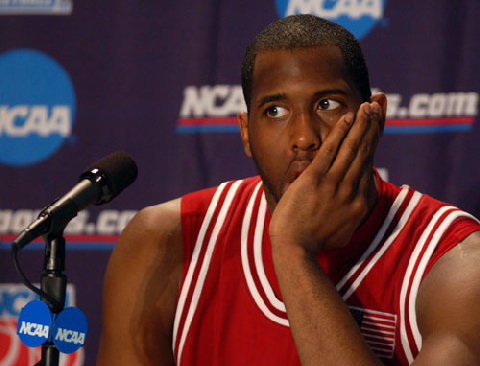 College basketball seasons are long and dynamic things. They’re not like college football seasons, which require drilled excellence from the outset and where a midseason loss can kill your chances at winning a truly screwed-up national championship. They’re not like NFL or NBA seasons, where each team is basically what they are starting in training camp. They’re not baseball seasons, either, where the playoffs are such a comparably small sample size that all a fan can hope for is a division title — the rest feels like a crapshoot.

Instead, college basketball teams, the ones that compete in March, have similar blueprints: They roll the balls out in October, look terrible in November and December, coalesce in January, fade slightly in February, and, if they’re really good, peak in March when the games matter most. This blueprint hits close to home; just look at Michigan State this year. Or North Carolina. Or any of the teams still playing basketball next weekend. Or any of the 20 or so teams that lost last weekend that deserved to win. That’s the blueprint you’re supposed to follow.

I wish we could look back at IU’s season, as this TMA intends to, and say they followed the blueprint. A loss to a good Arkansas team under those auspices would have been OK. But we can’t say that. Instead, they didn’t push to the finish, or peak in their late games. They quit. They just quit. And for some reason, I’m not even mad.

What can you be mad about? Not at the players. I’ve said this before, but it’s like mom (IU) and dad (Sampson) divorced in the middle of high school. College basketball players aren’t so removed from their teenage years. How did you think they’d respond? How would you have responded?

You can get angry at the administration for bungling the situation on about 100 different levels, but you can’t really get angry at them for firing Sampson in-season. Fans were calling for his head, and to save their own face and improve the prospects of a top-flight coach coming to IU in the next few weeks, they had to act quickly and decisively. Sampson had to be gone. You can’t blame them for trying to end a bad situation as soon as possible.

If you want to get angry, don’t blame the players, and don’t blame the administration. (At least not for this. Fall break — now that’s an issue to get mad about.) Blame Kelvin Sampson. He ruined everything, not only for himself, but the players he claimed to love, and for the university he devoted himself to. He had the balls to sit in the office of the winningest coach of all time — a coach with his own flaws, but with high standards, too — and merely pay lipservice to the notions many fans hold dear to their hearts. But he didn’t get it. It’s not just talk. It can’t be, not at IU. That Sampson didn’t understand the difference, that he was simultaneously so audacious and dumb as to assume his words were nothing more than a pacifier to his constituent public — well, that’s why he deserves scorn.

He made the season a sad footnote, made Dan Dakich an ineffective interim babysitter, made the players wonder where their father was. That’s where the anger belongs, if you believe it belongs anywhere: at Sampson’s feet.

Me? I’m not mad at all, like I said above. Anything positive that would happened after Sampson’s departure would have been a bonus. What’s the point in being all pissed off about a season that ended eight games ago? All you can do is gear up for the coaching search, throw your support into one corner or another, enjoy the rest of the tournament, and move on. Here’s trusting IU won’t make the same mistake twice. Here’s hoping they get the right guy. And here’s saying goodbye to everything that came before, where we — because this is sports, and not real life — can say without a drop of cynicism that a new day is dawning. And who could be mad about that?

— As for Arkansas, there’s not a whole lot to add. Eric Gordon (more on him below) didn’t suddenly start hitting shots again; IU didn’t suddenly start defending again; Dakich continued to force them to play man-to-man, a style at which they were never adept. It was the same sad story as every other post-Sampson game. IU gave up 86 points — 86! — on 66 possessions, and though their offense was OK, it’s very, very difficult to win when you allow 1.3 points per possession.

Positives? They’re hard to find. Maybe Lance Stemler hitting a couple of shots? Maybe, um … I don’t know. That was probably it, and even that felt kind of bitter. (Stemler waits until now to start shooting. Fantastic.)

— Friday’s loss meant saying goodbye to both Eric Gordon and D.J. White, and I’d assume that most fans have remarkably different opinions of the two players. We all know D.J. White’s story, and we all know that he was really the only player on the team fighting for anything down the stretch, or at least the only player having success doing so. White’s legacy will be one of loyalty and devotion and unfulfilled promises, but he will be canonized in Hoosier lore in very positive ways. In four years of tumult, he was a constant. He deserves credit — and every IU fan’s best wishes for a profitable pro career — for that.

But what about Eric Gordon? What legacy does he leave?

I think it’s safe to say, as the year closes, that Gordon is still vastly overrated in a variety of ways … but not as overrated as the last few games would make him seem. It’d be easy to jump on without remembering that Gordon is a freshman, and that freshmen are prone to injury, wear and tear, streaky shooting, and turnovers. We saw all of that in Gordon. We also saw some remarkable potential that he can fill, potential that might yet make him a slightly bigger version of Ben Gordon. The shame is that we won’t get to see what Gordon might have done with a year under his belt, what his progress as a sophomore might have been, if he could have competed for national awards commensurate to his obvious ability.

His legacy is mixed. It’s a shame — though an entirely justifiable one — that it’s also so short.

— As for the rest of these players, I’ll be the first to say I’m glad Jamarcus Ellis is going to come back, and I’m glad he seems to be saying the right things in regard to dealing with a new coach. Next year is Ellis’ shot — as a Juco guy, he only gets two — and he’d do well to make use of it. Same goes for DeAndre Thomas. Thomas needs to continue to shed pounds and to work on his vertical jump and strength in the post. He could be a valid contributor next year.

Armon Bassett was perhaps this season’s most pleasant individual surprise. He unveiled a truly consistent outside jumper, showed lots of defensive progress, and developed as a “true” point guard. Here’s hoping the new coach does enough to win him over before Bassett is swooned by a big program in need of a dead-eye shooter.

Lance Stemler was Lance Stemler. Lance was always asked to do things he had never done before in his life, so I will always appreciate his willingness to do so to find a spot at a higher level. If only he had been the shooter we were all promised; turns out, he was a volume guy, and there was no reason to give Stemler volume, like, ever.

Jordan Crawford was also a pleasant surprise this season. Crawford is a much more typical freshman than Gordon or Derrick Rose or any of the other super-frosh heading to college these days, but a few years ago, when the rest of those players would have gone pro, Crawford’s game would have been even more highly touted. All told, he’s a good shooter, a creative offensive player, a decent, if turnover-prone, passer, and a really bad defender. In other words, he’s a freshman. It’d be great to see him blossom over four years, but you couldn’t blame Crawford if he found somewhere else that recruited him a year ago. He has a bright future ahead.

Kyle Taber found a home this year. So long as he never, ever shoots the ball outside four feet — something Taber understands well, which is refreshing — I’ll be glad to have him back.

And everyone else: It was a season. It was OK at points. Bad at a lot of others. But like I said above, a new day is dawning. Let’s try to have some fun with it.

Editor’s Note: You can read more of PostmanE’s take on college basketball at the Dagger on Yahoo! Sports.