Phew!: IU escapes at home against the Illini 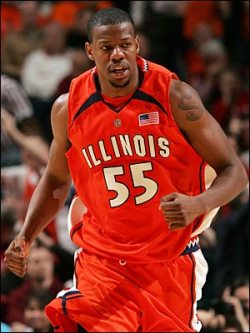 Well, this one certainly didn’t go as planned. The Illini did what they do best — that is, they defended the hell out of IU — and nearly handed the Hoosiers their first loss at home under Kelvin Sampson. Fortunately, IU was able to stop the Illini on their last crucial position of the game and Armon Bassett was fouled and hit two free throws to seal the deal for IU, 62-58.

Simply put: the Illini took IU out of their game all afternoon. The combination of Calvin Brock and Brian Randle frustrated Eric Gordon — he scored 17 for the afternoon, thanks to his penchant for getting to the line — and the Illini double-teamed D.J. White all game, setting up errant passes and futile possessions. If the Illini could actually make free throws, this game could have had a different outcome, that’s for sure. They were 13-21 for the game.

As was maybe to be expected, there was some verbal jarring back and forth between the squads. Once in the first half, Shaun Pruitt and DeAndre Thomas got into a bit of a tussle on the floor. In the second half, Randle and Jamarcus Ellis were jawing at each other across the lane during free throw attempts.

This certainly wasn’t the prettiest win, or an EJ assault on the Illini or a very comforting game as a fan — one particularly grinding thing: Illinois didn’t score a field goal for nearly ten minutes in the second half and IU only manged to gain a five-point advantage during that frame — but hey, it’s a win. And that’s all that really matters. IU is now 3-0 in the Big Ten and tied for first with Wisconsin. The Hoosiers are 14-1 overall.

Get ready for the rematch Feb. 7. It’s gonna be a doozy.