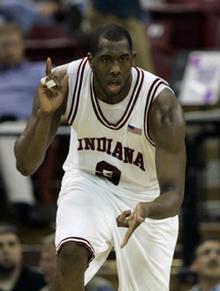 Eric Gordon scored 29 points and D.J. White added 18 points and 14 rebounds as No. 15 Indiana held off Georgia Tech 83-79 in the Big Ten/ACC Challenge on Tuesday night at Assembly Hall.

White played arguably his best game of the season, hitting 6 of 9 from the field and adding three blocks.

Lance Stemler found his way back into the starting lineup and had a season-high 15 points. Stemler hit 3 of 6 three-pointers in 32 minutes. Jamarcus Ellis also had 15 points and seven rebounds.

“My job on this team is to make other players better. It’s easy for me to score and just go to the basket like I did tonight. Without Jordan Crawford, I had no other choice but to be in attack mode,” Ellis said.

Lewis Clinch paced Georgia Tech with 18 points and Gani Lawai chipped in 17. The Yellow Jackets (3-3) shot 47 percent from the field but committed 13 turnovers and were out-rebounded 37-32.

Mike White saw his first action of the season for Indiana and scored two points and grabbed six rebounds in 20 minutes. Indiana coach Kelvin Sampson had announced that White would redshirt last week, but had a change of heart after the loss to Xavier.

“They (Xavier) just exposed how really immature and inexperienced we were. We just can’t go to the transaction wire and get somebody, we have somebody sitting right here that can help this team,” Sampson said.

Sampson also announced the suspension of guard Jordan Crawford prior to the game. Crawford will return December 8 against Kentucky.