The Morning After: Xavier 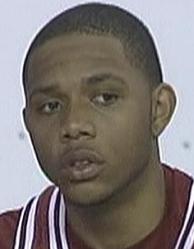 Losing early in the year is never as bad as it feels — last night, it felt like anger with a capital ANGER — but the next day comes and the frustration wears off and you start to focus in on reality again. And after a couple viewings of last night’s game (I’m going to shelf the ISU game for now), it’s clear there are deficiencies in this team. Some of them are correctable, and some are not; the rub is in knowing one from the other.

— Eric Gordon’s struggles. The bottom line is that as good as Gordon is, he is not infallible. He remains a freshman, prone to freshman frustrations, overexertions and mistakes. Credit Xavier’s physical defense, especially guard Stanley Burrell (who stayed in front of Gordon on nearly every possession), and the way the Musketeers refused to rotate away from Gordon the entire night. Xavier drew the blueprint for beating IU: Make Gordon settle for contested jump shots, and make the rest of the Hoosiers step up offensively.

That didn’t happen last night — IU was woeful from the three point line, and besides D.J. White’s first good game the Hoosiers had little presence in the paint — but it won’t happen every night. IU will shoot better, and Gordon will find the difference between asserting himself and forcing things. The chances that teams will be able to shut him down, and rely on poor play from everyone else, seem pretty slim.

(After the jump: Defensive discussion, the arrogance of youth, Uncorrectables that I hope are actually correctable, and sour grapes.)

— Defensive coherence. The Hoosiers’ most glaring issue throughout their first three games was team defense, and they showed no progress last night. D.J. White and DeAndre Thomas are both hedging screens far too high and struggling to recover; by the second half, Xavier was rotating the ball much more quickly to exploit the slow recovery. It even led to White’s top-of-the-key guarding of Drew Lavender, and while that didn’t end up in a Lavender bucket, it induced a giant gulp from at least one viewer.

Transition defense was also extremely leaky. That led to open layups in transition, uncontested jump shots in the secondary break, and, most notably, Jamarcus Ellis ending up on the wrong end of a Derrick Brown poster moment. I felt bad for Jamarcus, mostly because he was trying to do the right thing by stepping in and taking the charge, but he really should have just gotten the hell out of dodge when he saw Brown getting ready for liftoff. But, yeah: the transition and secondary break defense was awful, and has to get better. Here’s betting it will.

— The arrogance of youth. Those of you that have seen Cold Mountain (good movie) will recognize the quote, but in referring to the Hoosiers, I’m looking at Gordon, Jordan Crawford, DeAndre Thomas, and even Ellis. In their first game against an athletically mature team, each of IU’s new additions looked overwhelmed. This is just a theory — one obviously open for debate — but that might be due to the lack of prior experience with a team in the same talent ballpark as the Hoosiers. (This theory has its limits; after all, in today’s basketball talent development, players play so many AAU games they get to see plenty of athletic talent.) Still, thus far everything has been easy for IU. Last night, IU’s newcomers learned that most of Division 1 looks more like the Musketeers and less like the Longwood Lancers.

(Probably, but hopefully not) Uncorrectable

— Athleticism at the four. I like DeAndre Thomas for what he is: a big body with above-average skills. But at 295 pounds, and only, like, 6’7”, Thomas is going to meet more than a few power forwards this year that will outjump him every time down the court. Last night, Xavier’s bigs were not only more athletic than DeAndre, they were just as strong, and IU suffered match up problems because of it.

Which brings us to Lance Stemler. Even more than DeAndre, we know what Lance Stemler is: an unathletic three guard shackled by a forward’s slow feet. Sampson plays Stemler at four to decrease the likelihood that Stemler has to guard on the perimeter, because nearly every time Lance was caught out top, he got blown by. He’s not a particularly high jumper, nor does he seem to have a nose for rebounds; he’s just sort of there sometimes. Lance also does a lot of the “little things” a lot of us admire — he fights for loose balls, dives on the floor, comes up with a strip or two here and there — but at this point it’s hard to argue that Lance does enough of the little things to make up for the very big things he simply can’t do.

— Reliance on the outside shot. It’s too early to know if the Hoosiers are going to be as dependent on outside shooting as they were last year, but if they are, last night’s game shows how that problem can come rearing its ugly little at the wrong times. IU doesn’t need to shoot particularly well against teams like Chattanooga, but against a tough, physical team like Xavier, those shots are all the more crucial. Last year, the Hoosiers played a tough, physical team (UCLA) in the second round of the NCAA tournament; when those shots went cold, IU was effectively sunk (despite a late game surge). There’s still time for IU to be a balanced offensive team, but if they aren’t, we’ll be begging the three point gods for makes all year. It’s not nearly as much fun as it sounds.

— Memo to Drew Lavender: Winning the Chicago Invitational Tournament, even by upsetting No. 8 IU, is not worthy of the traditional post-NBA Finals ball toss. In case you didn’t see it, after the final buzzer, Lavender reached below his waist and launched the ball, tremulet-style, into the rafters. Maybe I’m the only person this irked. Probably because I’m an IU fan.

— Memo to everyone else on Xavier: Chest-pounding is healthy, even preferable, after a big dunk or a three-point play, et al. At some point, though — around, oh, the 40th or 50th chest-pound — it starts to cross over into annoying. Maybe I’m the only person this irked. Probably because I’m an IU fan.

That’s it for this week, but there’s plenty more to discuss. As always, your additions in the comments.