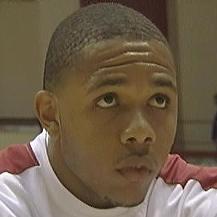 Another game, another Indiana record for Eric Gordon.

Gordon’s 21 points in Sunday’s 100-49 win over Longwood in Assembly Hall set a school record (54) for combined points scored by an Indiana player in his first two college games.

The previous record was held by George McGinnis who tallied 52 points in his first two games in an IU uniform back in 1970.

Gordon shot 8 of 14 from the field, including 5 of 8 on three-pointers in IU’s opener of the Chicago Invitational Challenge.

“It’s a big adjustment,” Gordon said of the transition from high school to college. “The game is a lot faster and a lot stronger, so I’ve pretty much adjusted to the college game pretty well. We’re an unselfish team so I’m able to score a lot more points.”

The result was never in real doubt as Indiana raced to 17-6 lead early and held the Lancers (2-2) to 30 first-half points on 33 percent shooting. Indiana shot 64.5 percent in the first half and led 54-30 at the break.

“I thought Armon Bassett came out and set a real tone for us,” coach Kelvin Sampson said. “EJ made shots, Armon made shots, Jamarcus passed it. When we have great spacing and move the ball, we’re going to get good shots.”

The Hoosiers will continue the Chicago Invitational Challenge Tuesday evening at Assembly Hall at 7PM against UNC-Wilmington on the Big Ten Network.