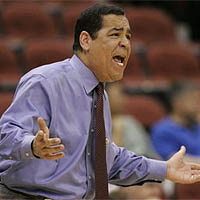 “I thought as the game went along, we defended better. The first time you walk out, we had an unbelievable crowd here today, I think the first half we were a little worried about doing this and doing that instead of just competing and defending. Second half we defended better. Almost on every one of our baskets, it led from a pass. That tells you that your kids are being unselfish. The more we play together, the better we’re going to be. The first game is, you know we’ll break the film down, edit it and learn from our mistakes and just keep getting better.”

“Second half I thought was outstanding. First half I think it was due to jitters and nervousness. People forget we have four freshman who are playing for their first time ever. I don’t care how good you are, a freshman’s a freshman. I thought the second half they started competing, but I think we’ll see a lot of improvement this week in practice and then our next game on Saturday. “