Report: Bud Mackey brought crack to school in his shoe; admits to delivering it 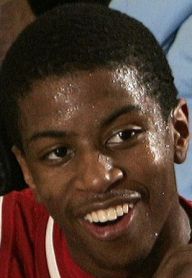 Some more details have fluttered out about promising IU recruit turned Just Another Sad Story Bud Mackey. And, it looks as if he’s admitted to school administrators he was delivering the crack cocaine he was caught with to someone.

According to an arrest report, Jonathan “Bud” Mackey, 18, entered Scott County High School with 1.6 grams of rock cocaine in his shoe and $29 in cash. The rock cocaine was broken into five small pieces, and Mackey told school administrators he was delivering it to an unidentified person, the report said.

Mackey, a senior, has been suspended initially for 10 days from all school activities and prohibited from entering school grounds, principal Frank Howatt said. The district will review whether Mackey will be expelled.

Not much more to say here that hasn’t been said. (I’ll direct you back to E’s more in-depth look at Mackey’s situation.) And furthermore, if Mackey is admitting to school administrators he had an intent to deliver the drugs to someone, that sort of throws the “hey, maybe he’s innocent, let’s wait till all the facts come out” school of thought.

Ugh, this is just a shame. Is it too late to start up a “Free Bud” campaign?