Sampson does work at Wolf Challenge 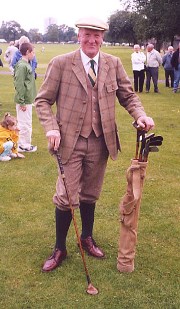 We’ve all been rather intrigued by Fuzzy Zoeller’s Wolf Challenge, namely because the group Kelvin Sampson was set to play with was um, rather eclectic.

Well, the golf shindig went down today and Coach Sampson, despite a rough start, held his own and finished second in the foursome.

But it was Sampson, just three holes after being serenaded by the Indiana University fight song from a group of about 50 fans, who had the most memorable shot.

On the par-4, 16th hole, Sampson chipped in over a bunker and from 53 yards away to win the $27,000 skin on the hole. He was partners with Zoeller and Daly on the hole, so the three split the earnings.

“A blind squirrel,” Sampson said of the shot.

“I was so bad early (in the round) these guys were trying to give me lessons,” said Sampson, who actually spent several minutes on the third hole watching and listening to a tip from Lee Trevino. “Then at the end, they were asking me for lessons.”