Lance Stemler speaks on the upcoming season, the status of his ankle, Eric Gordon and more 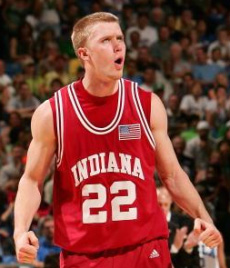 Lance Stemler talked to reporters following the Barnstorming Tour game at New Albany High School and the 6’8″ senior forward had a lot of interesting thoughts.

Inside the Hall was there as he discussed the upcoming season, his ankle injury, the advice he gave the incoming players about the tour around the state, Eli Holman, Eric Gordon, DeAndre Thomas and Jordan Crawford.

On the depth of this year’s team:
“We’re definitely going to have to compete for our spots, which is a good thing. No one can get too comfortable with as deep as we are.”

On the status of his ankle:
“It feels good. I’ve been playing for about two weeks now.”

On how the ankle injury impacted his play last year:
“It changed the way I played a little bit. I couldn’t do some things that I did before. My shooting went down and I didn’t have any push off of it. Coach told me that he needed me to be the hustle guy, so that’s what I tried to do.”

On whether he gave the incoming players any sense of what it would be like on the Barnstorming Tour:
“Yeah, I did but they just kind of looked at me with blank stares. I think EJ is the only one that understood it. You really don’t understand it until you get into it. Just like come Midnight Madness we’ll tell them what it’s going to be like, but when they pack that place with 17,000 it’s a whole different ballgame.”

On the whether the expectations are being cranked up for the upcoming season:
“Yeah, I think so. I think with the talent we have the highest expectations are what we put on ourselves. We go into every workout, everyday, knowing that we’ve got talent and that we want to get to San Antonio. That’s our number one goal right now. We go into every workout working towards that goal.”

On what Eli Holman brings to the table:
“He’s long. Long and he runs like a deer.”

On the first time he saw Eric Gordon play and whether he’s worthy of the hype:
“It was last year in a high school game (on TV). People hyped him up pretty good, but he’s definitely that good. He’s smart, he’s been well coached, he’s so athletic and explosive and he’s got unlimited range on his jumper. He’s the total package. He’s a great passer. He sees things that normal people don’t see. The first day he played with us at open gym he threw a pass and everybody just kind of looked at each other like ‘wow’. That’s something I didn’t know he was that good at. He’s definitely a man.”

On what DeAndre Thomas brings and his progress since arriving in Bloomington:
“Talk about a man, he’s a big man. He’ll give us size under the basket and skills too. He’s got really good footwork for a guy his size. He’s lost about 25 pounds. He’s working hard too, running, walking 10 miles or so a day.”

On Jordan Crawford’s play this summer:
“I think he’s surprised me the most. I didn’t know anything about him. They told me he was coming and he got on campus and started playing with us and I was like wow, this kid’s good.”